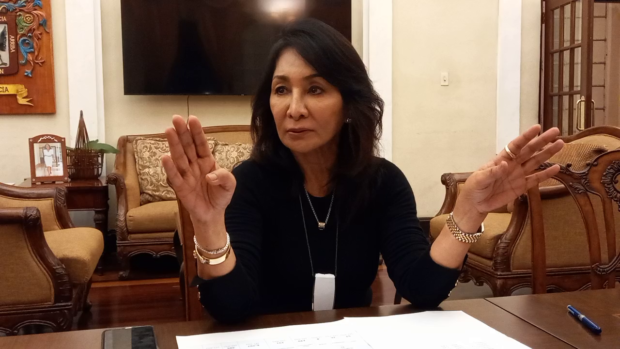 During a Senate committee hearing on issues concerning the government’s COVID-19 response and quarantine protocols on Tuesday, Garcia said she could not “unilaterally set aside” Cebu’s set of protocols since this was not only embodied in an executive order but also in a provincial ordinance.

The governor said that while she had “deep respect” for the president, she also had “great respect for the rule of law.”

“As we all know, a provincial ordinance, unless declared ultra vires (beyond one’s legal power or authority) in a proper court, is the local law of the land, in accordance with Republic Act No. 7160, otherwise known as the Local Government Code,” Garcia said.

On Monday, presidential spokesperson Harry Roque said Duterte directed the Cebu provincial government to adhere to the policy laid out by the Inter-Agency Task Force for the Management of Emerging Infectious Diseases (IATF) on returning Filipinos and OFWs mandating a 10-day quarantine and swabbing on the seventh day from their arrival.

The directive was issued after Cebu continued imposing the local protocol after international flights resumed at MCIA on Sunday.

International flights bound for MCIA had been diverted to Ninoy Aquino International Airport in Metro Manila from May 29 to June 12 after the Cebu provincial government refused to adopt IATF’s policy.

Dr. Mary Jean Loreche, spokesperson for the Department of Health (DOH) in Central Visayas, said they would continue to swab OFWs and returning Filipinos on their arrival at MCIA.

According to Loreche, Cebu’s protocols do not violate IATF guidelines since returning Filipinos who tested negative during their first swab test at the airport will be again tested on the seventh day, but in their hometowns or destinations through the local governments.

Garcia said she would ask the provincial board to review the ordinance and to invite the technical advisers or medical experts that Health Secretary Francisco Duque III had cited during the Senate hearing and in their meetings so they could present their data.

“[We will do that] out of deep respect to the president. A revisit of the ordinance [is what] I shall be requesting because I cannot unilaterally set aside the implementation of an ordinance lest I be accused of dereliction of duty,” Garcia said.