DOT: Travel open for all but rules must be followed | Inquirer News
Close
menu
search

DOT: Travel open for all but rules must be followed 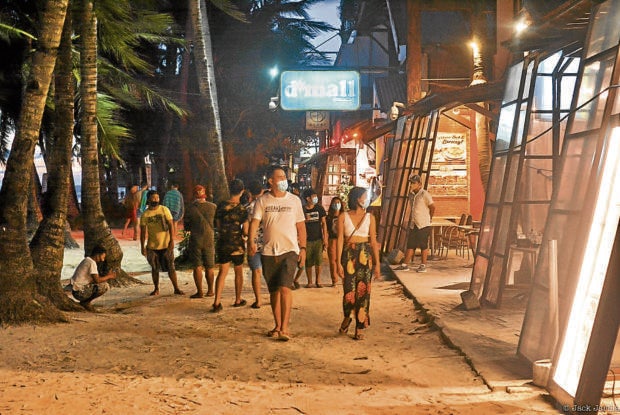 GRADUAL RETURN Restaurants and other shops in Boracay have reopened as tourists from Metro Manila and provinces in Western Visayas region start to return to the resort island in Malay, Aklan. —JACK JARILLA

MANILA, Philippines — The Department of Tourism (DOT) has asked the public as well as tourism enterprises to follow government guidelines and safety protocols as it clarified that tourists of all ages are free to travel from Metro Manila and its nearby provinces to Boracay Island and other destinations where quarantine restrictions have been eased until June 30.

Tourism Secretary Bernadette Romulo Puyat made the appeal amid continuous reports of irresponsible tourist practices, such as forging of RT-PCR (reverse transcription-polymerase chain reaction) tests, faking of identification cards and holding of unauthorized gatherings in tourist destinations in different parts of the country.

“The amended guidelines from the task force also comes with the responsibility to strictly adhere to the minimum health and safety protocols when traveling,” Puyat said in a statement.

The Inter-Agency Task Force for the Management of Emerging Infectious Diseases (IATF) had allowed the movement of people in and out of the National Capital Region (NCR) Plus area (Metro Manila and the provinces of Bulacan, Cavite, Laguna and Rizal) from June 1 to June 15. This was extended up to June 30.President Duterte announced earlier this week that NCR Plus would remain under general community quarantine (GCQ) with varying degrees of restrictions.

“This extended liberal movement of people will allow the DOT and local government units to revive the jobs of displaced tourism workers,” Puyat said.

Resolution No. 121 of the IATF allows interzonal travel between areas under GCQ and modified GCQ (MGCQ) for leisure purposes. However, tourists coming from Bulacan, Cavite, Laguna and Rizal may only undertake point-to-point travel to GCQ and MGCQ areas.

Such travel allows all ages, but subjects those below 18 and above 65 to RT-PCR testing before the trip. They must also observe restrictions imposed by the DOT and the destination’s local government.

According to the DOT, accredited “staycation” hotels in all GCQ areas are allowed to accommodate leisure guests at up to 100 percent of their capacity. Other DOT-accredited establishments in GCQ areas could operate at 30-percent capacity only for guests coming from the same household and subject to the strict monitoring of the local government.

Citing data from the municipal tourism office in Malay, Aklan, the DOT said a total of 9,066 tourists arrived in Boracay through Caticlan airport from June 1 to June 13.

Of this number, 890 are children 12 years old and below while 178 are 60 years old and above.About 64 percent, or 5,772 visitors, in Boracay came from Metro Manila followed by those from Calabarzon region, with 681 visitors from Rizal, 639 from Cavite and 462 from Laguna, the DOT said.