Biden, Erdogan upbeat about ties but disclose no breakthrough 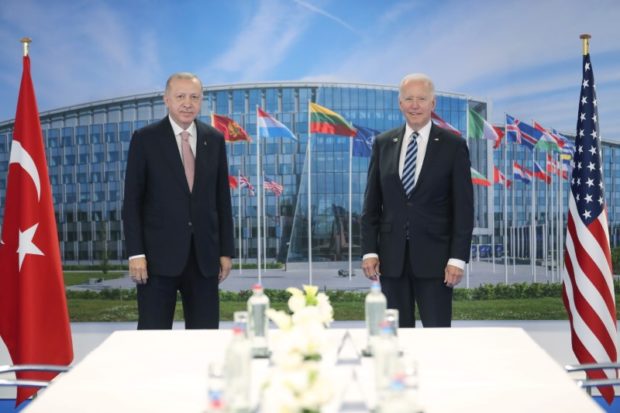 BRUSSELS — U.S. President Joe Biden and Turkish President Tayyip Erdogan sounded upbeat after their first face-to-face talks on Monday, although they did not announce major breakthroughs in the relationship between the two allies, at odds over Russian weapons, Syria, Libya and other issues.

“We had a positive and productive meeting, much of it one-on-one,” Biden told a news conference after their meeting in Brussels.

“Our teams are going to continue our discussions and I’m confident we’ll make real progress with Turkey and the United States,” he added.

Erdogan characterized his talks with Biden on the sidelines of a NATO summit as “productive and sincere.”

“We think that there are no issues between U.S. and Turkey relationship that are unsolvable and that areas of cooperation for us are richer and larger than problems,” he said.

Despite their publicly optimistic tone, neither provided any details on how exactly they would mend the relationship or lay out steps that would help ease tensions between the NATO allies.

Turkey, with NATO’s second-largest military, has angered its allies in the Western military alliance by buying Russian surface-to-air missiles and intervening in wars in Syria and Libya. It is also in a standoff with Greece and Cyprus over territory in the Eastern Mediterranean.

As president, Biden has adopted a cooler tone than predecessor Donald Trump towards Erdogan. Biden quickly recognized the 1915 massacre of Armenians as genocide – a position that angers Turkey – and stepped up criticism of Turkey’s human rights record.

Washington has already removed Ankara from the F-35 fighter jet program and imposed sanctions over Turkey’s purchase of the Russian S-400 surface-to-air missiles.

One area where Erdogan hoped to showcase a central Turkish role in NATO is Afghanistan, where Ankara has offered to guard and operate Kabul airport after U.S. and NATO forces withdraw in coming weeks. NATO head Jens Stoltenberg said Turkey would play a key role but that no decision was made at the Monday summit.

At the start of the main leaders’ session at NATO, Biden spoke to Erdogan at length in a small group before they took their seats.

Later in the day, the two leaders and their top aides sat mostly silently on opposite sides of a conference table, ignoring questions shouted to them by journalists briefly invited into the room.

Erdogan also met French President Emmanuel Macron. Ankara and Paris have been at odds over Syria, Libya and Turkish criticism of the fight against what Macron calls Islamist separatism, among other issues.

“President Erdogan confirmed during our meeting his wish that the foreign mercenaries, the foreign militias, operating on Libyan soil leave as soon as possible,” Macron told a news conference afterwards.