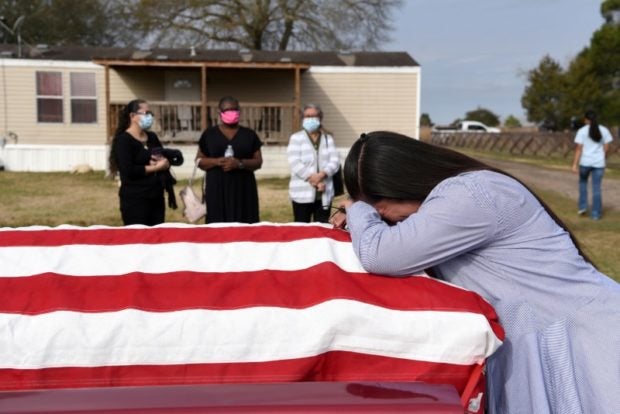 Lila Blanks holds the casket of her husband, Gregory Blanks, 50, who died of the coronavirus disease (COVID-19), ahead of his funeral in San Felipe, Texas, U.S., January 26, 2021. REUTERS FILE PHOTO

The United States on Monday crossed the grim milestone of 600,000 COVID-19 deaths, according to a Reuters tally, as slowing vaccination rates threaten the Biden administration target of having 70% of U.S. adults receive at least one shot and 160 million fully inoculated by July 4.

The early success of the U.S. vaccine rollout has had a huge impact on the pace of COVID-19 fatalities in the country.

“My heart goes out to those who’ve lost a loved one…. We have more work to do to beat this virus and now’s not the time to let our guard down,” said President Joe Biden on the sidelines of NATO meetings in Brussels, Belgium, urging people to get vaccinated.

The U.S. seven-day COVID-19 death average has fallen by almost 90% from its peak in January. The country reported 18,587 coronavirus-related deaths in May – about 81% less than in January, Reuters data showed.

While the epicenter of the pandemic has shifted to places like Brazil and India in recent months, the United States remains the hardest-hit nation in terms of cumulative deaths.

But the country has so far vaccinated 166 million adults with at least one dose, according to the U.S. Centers for Disease Control and Prevention (CDC), although the rate of shots administered has dropped significantly from a mid-April peak.

The average seven-day COVID-19 hospitalization number has also plummeted since April due to vaccinations. On June 2, total hospitalized patients fell below 20,000 for the first time since June 24, 2020.

However, hospitalization among teenagers has increased as more easily transmitted virus variants began to spread, according to recent CDC data.

The rate of hospitalization due to COVID-19 increased among adolescents aged 12 to 17 in April to 1.3 per 100,000 people from a lower rate in mid-March, the agency reported.

Overall, daily new COVID-19 cases have also been dropping since March, with the country reporting the lowest number of cases per capita in May of this year, according to a Reuters analysis.

With vaccinations down to about 1.10 million doses per day last week – some 67% lower than the highest seven-day rate – the Biden administration and state governors have come up with all manner of incentives to get unvaccinated people to roll up their sleeves. These include free childcare and rides to vaccination centers, extended Friday night hours at pharmacies and the chance to win $1 million or college scholarships in a lottery.

As of Sunday, nearly 52% of the U.S. population has received their first vaccine dose, according to the CDC.