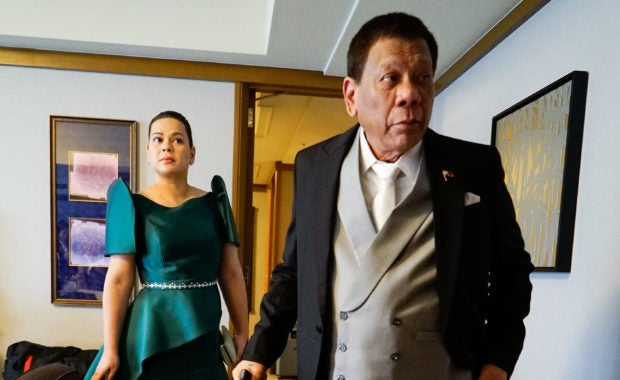 MANILA, Philippines — While two Dutertes being elected in the two highest positions in the country is possible in 2022, Senator Panfilo Lacson said it is unlikely that Davao City Mayor Sara Duterte-Carpio and President Rodrigo Duterte will run under the same slate.

“The information that is reaching us is that [President] Duterte is running under a different slate from that of Mayor Sara Duterte. It’s Sara and somebody else and then somebody else and President Duterte,” Lacson said in an interview on ABS-CBN News Channel Monday when asked on a possible Duterte-Duterte tandem in the upcoming national elections.

Duterte earlier said he is reluctant to run for vice president in the 2022 elections as he is now ready to retire.

His political party, Partido Demokratiko Pilipino-Lakas ng Bayan (PDP-Laban), however, has formally urged him to run for vice president in 2022.

While Duterte is still deciding on his plans for 2022, Malacañang said the chief executive is not yet saying no to running for vice president.

Meanwhile, Duterte said his daughter is not running for president, reiterating that he had cautioned his daughter against seeking the highest post in the country.

But the Davao City mayor’s name was recently floated as a possible presidential candidate in the 2022 elections after Albay Rep. Joey Salceda said that there is “no doubt” in his mind that she will run for president.

“A Duterte-Duterte in Malacañang and in the Office of the Vice President is a possibility. But both of them running under the same slate, I don’t think it will happen,” Lacson went on.

“So the possibility that both of them would be elected into office is there but I don’t see the probability of them running together under one ticket,” Lacson added.

In a television interview in March, Lacson said Filipinos are not ready for a Davao-City-like political situation, adding it would be a “bit too much.”

“The Philippines is not Davao City. If they can do that in Davao City, I don’t think Filipinos are ready for a Davao City-like political situation or arrangement. I don’t think so,” he had said.