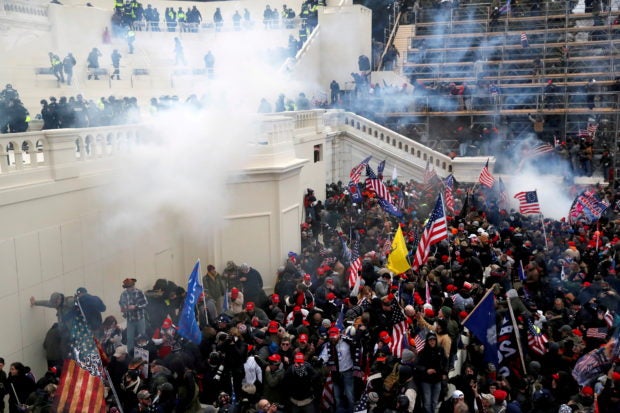 FILE PHOTO: Police release tear gas into a crowd of pro-Trump protesters during clashes at a rally to contest the certification of the 2020 U.S. presidential election results by the U.S. Congress, at the U.S. Capitol Building in Washington, U.S, January 6, 2021. REUTERS/Shannon Stapleton/File Photo

WASHINGTON — Federal prosecutors have charged six members of the Three Percenters right-wing militia group with conspiring to attack the U.S. Capitol, the latest in a series of such charges arising from the Jan. 6 riot by former President Donald Trump’s supporters.

The charges against the six men, all from California, were disclosed in an indictment unsealed on Thursday in federal court in Washington. Two of them, Alan Hostetter and Russell Taylor, were seen a day before the riot with Roger Stone, a friend and adviser to Trump, during a protest outside the U.S. Supreme Court against the outcome of the 2020 presidential election.

About 30 people – including members of two other right-wing groups, The Oath Keepers and The Proud Boys – have been accused of conspiracy, the most serious charges related to the riot. Those pending cases are the largest and most complex of the roughly 500 brought by the Justice Department since the attack.

Founded in 2008, the Three Percenters is a loosely organized anti-government group that takes its name from the idea that only 3 percent of American colonists took up arms against the British in the 18th century American Revolution.

Beginning in December 2020, the six men hatched a plan using the encrypted messaging app Telegram to bring weapons to Washington and storm the Capitol, according to the indictment. Prosecutors said the men selected Jan. 6 because of a Dec. 19 Trump Twitter post stating: “Big protest in D.C. on January 6th. Be there, will be wild!”

Prosecutors said that on Dec. 29 Taylor told his accused co-conspirators on Telegram: “I personally want to be on the front steps and be one of the first ones to breach the doors!”

The pro-Trump mob stormed the Capitol, interrupted the formal congressional certification of President Joe Biden’s election victory, clashed with an overwhelmed police force, and invaded the House of Representatives and Senate chambers. The violence left five dead, including a police officer.

Trump granted a pardon to Stone in December, wiping away his conviction arising from a federal investigation that documented Russian interference in the 2016 U.S. election. Stone did not immediately respond to a request for comment.

Read Next
PH to just wait for results of ivermectin trials in other countries
EDITORS' PICK
SANTIS Delicatessen: The road to survival is sweet and savory
Piolo Pascual: The Ultimate Heartthrob continues to level up
P258M shabu seized, Chinese national arrested in Manila drug bust
Gilas out to prove Korea win not a fluke; Tab fires back at ‘lucky shot’ remark
Eleazar: PNP open to ICC probe but PH judicial process is working
Man wounded as raid on illegal cockfight in Isabela leads to shootout
MOST READ
Palace: Face shields no longer needed to be worn outdoors
Duterte declares face shields still mandatory indoors and outdoors
Lacson or Pacquiao a possible presidential candidate for NPC – Sotto
LOOK: ‘Low vaccination’ turnout in 4 Manila sites after no walk-in policy
Don't miss out on the latest news and information.