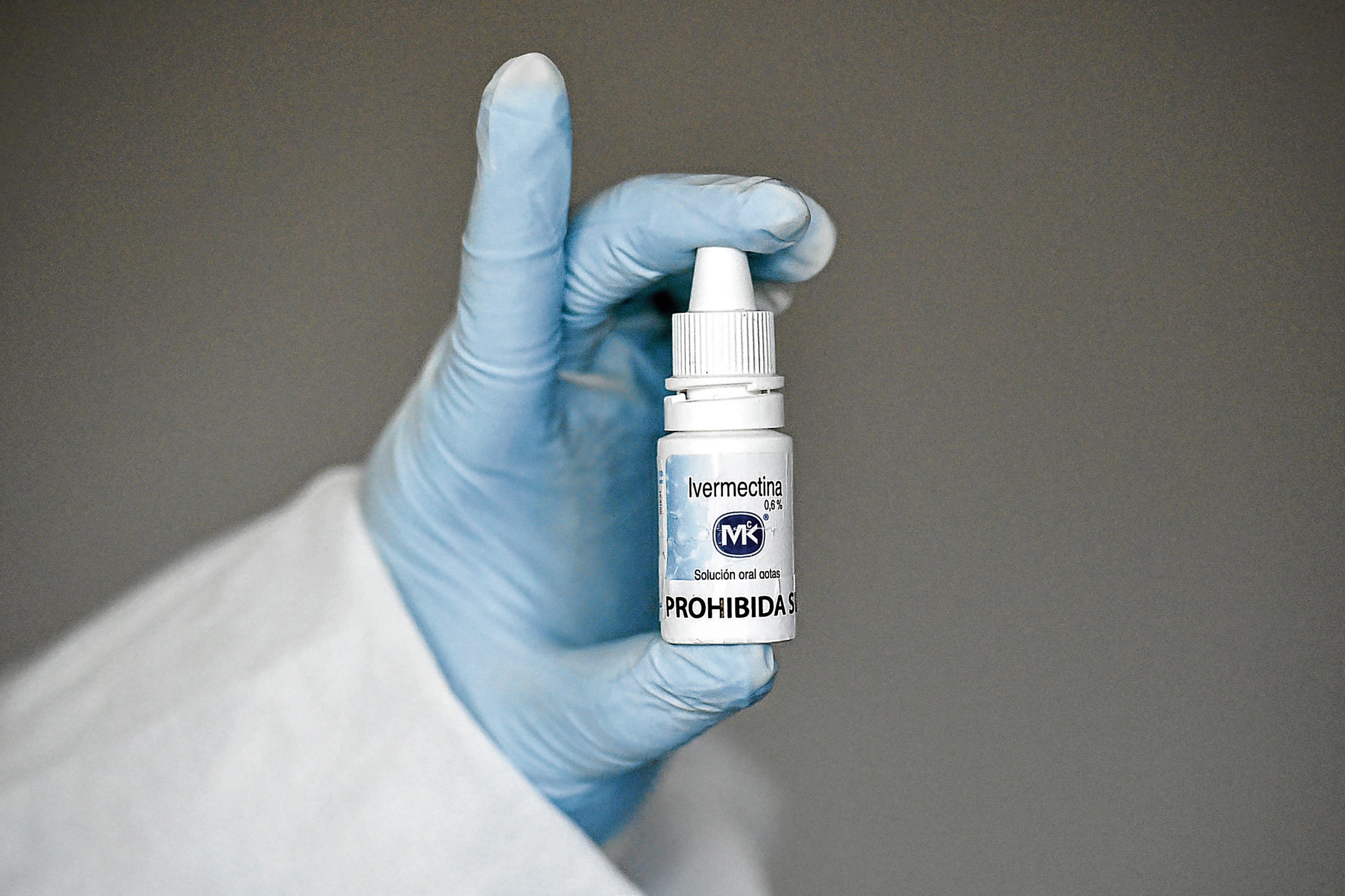 NOT YET FOR COVID-19 A health worker shows a bottle of ivermectin, which some countries use to treat COVID-19. —AFP

MANILA, Philippines — There is no more need for the Philippines to conduct its own clinical trial on ivermectin as a prophylactic, or preventive medicine for COVID-19, because several trials are already being done in other countries, according to experts studying the drug.

Dr. Aileen Wang of the University of the Philippines-Philippine General Hospital (UP-PGH) said at least five international studies are already being conducted, “so my feeling is, we don’t really need to do one in the Philippines and [instead] just wait for the results of] these studies.”

UP-PGH Department of Internal Medicine vice chair for research Dr. Cecilia Jimeno said, “there is no plan, at the moment, for an ivermectin prophylaxis trial.”

In a recent webinar, UP-PGH discussed at least seven ongoing COVID-19 treatment trials as it recognizes the “exigency” of recruiting trial participants, Jimeno said. These include trials on tocilizumab, virgin coconut oil, melatonin and favipiravir.

Tocilizumab is a medication given through intravenous injection to those who experience symptoms of certain types of arthritis. Melatonin, a hormone that the human brain produces in response to darkness, is usually taken to aid sleep disorders, anxiety and jet lag.

Coconut oil, on the other hand, is used to treat obesity and skin conditions, such as eczema (atopic dermatitis) and scaly and itchy skin (psoriasis). But according to the National Library of Medicine, there is no sufficient scientific evidence to support its medicinal uses. The popular variety of coconut oil called “virgin” coconut oil means that the oil is generally unprocessed, as it has not been bleached, deodorized or refined.

Favipiravir is an anti-influenza drug approved for manufacture in 2014 in Japan under the brand Avigan. According to the National Center for Biotechnology Information, favipiravir is expected to be an important therapeutic agent for severe influenza, the next pandemic influenza strain and other severe RNA virus infections.

Jimeno said some of these trials are nearing completion, for instance the one on tocilizumab which will end on July 15.

Ivermectin, which some alternative doctors touted as a COVID-19 prophylaxis and treatment, drew controversy after some lawmakers mass distributed tablets in Quezon City despite the lack of approval from the Food and Drug Administration.

In April, President Duterte ordered the conduct of a clinical trial in the Philippines for the drug.

Wang, who leads the study on the antiparasitic drug as COVID-19 treatment, said ivermectin has “generated some of the biggest interest” with 83 randomized trials being conducted in different countries.

Jimeno cautioned that the trials drugs are “repurposed” medicines for COVID-19.

“We are not yet at the point where I think we are ready to release any results and I don’t think it will help for us to have any speculation,” she said.

Aside from the trial drugs, the Philippines is launching a mix and match trial of COVID-19 vaccine brands.

The Department of Health (DOH) on Thursday recorded 7,485 new COVID-19 infections, which brought the country’s total case count to 1,293,687. It was the second day in a row when there were more than 5,000 new cases logged.

In its daily case bulletin, the DOH said there are currently 56,921 active cases, or currently sick individuals. Of this number, the majority, or 92.6 percent, are mild cases, 3.2 percent are asymptomatic, 1.7 percent have severe symptoms, 1.3 percent are in critical condition and 1.16 have moderate symptoms.

The health department also said another 4,504 individuals have recovered from the respiratory disease, which brought the total number of survivors to 1,214,454.However, another 122 patients have also succumbed to the illness, bringing the total death toll to 22,312.

Meanwhile, the DOH said it removed 15 duplicate cases from the total case count, while 65 cases previously tagged as recoveries have been reclassified as deaths following final validation. Four laboratories failed to submit their data on time, said the DOH. —With a report from Inquirer Research INQ