MANILA, Philippines — Energy Secretary Alfonso Cusi proposed Thursday that the government should take control again of the system operations of the country’s power grid from privately-owned National Grid Corporation of the Philippines (NGCP).

During the Senate energy committee hearing on the recent Luzon power outages, Cusi lamented the NGCP’s supposed failure to comply with its franchise requirement to secure “firm” contracts for energy reserves.

The lack of power reserves was among the factors the Department of Energy (DOE) had attributed to the recent rotational brownouts in Luzon.

“In my proposal, the system operation should be reverted back to the government. What are the duties of a system operator? To make sure that the grid stability is achieved, the dispatch and planning of power. So in a situation like this, if you are the system operator, you have to find ways for a solution and there are available solutions and the thing is, how come it’s not being done?” Cusi told the Senate panel.

“The DOE is the face of the industry. Sampal samaplin na po kami sa kasalanan ng iba,” he added.

He said the system control of the grid should be placed back under the government to ensure “proper management of ancillary services as well as national security, especially since NGCP is a private corporation with substantial foreign ownership.”

The NGCP is a consortium tasked to operate, maintain, and develop the country’s state-owned power grid. It was in 2009 when the NGCP took over the grid from state-run National Transmission Corp. (Transco).

Cusi likewise pointed to the delay in NGCP’s transmission projects. Providing transmission lines is an obligation of the NGCP under its franchise, the energy secretary told senators. 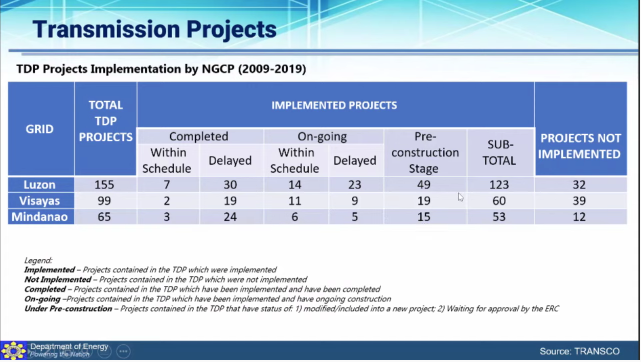 Department of Energy presentation during a hearing of the Senate energy committee on Thursday, June 10, 2021. Screengrabs from Senate Youtube livestream

A presentation from the DOE showed that the duration of delays of NGCP’s transmission projects since 2009 ranged from one to nine years.

Give DOE some teeth

Aside from reverting the grid’s system control to the government, Cusi asked that Congress give the DOE authority to sanction erring industry players.

“The DOE has no authority to sanction. We establish policies and you can see that all the policies are in place, may mga programa tayo,” he said.

For its part, the NGCP said it has been “constantly bullied” and blamed for the recent power interruptions.

“We were blamed for not contracting enough ancillary service as if it is the solution to the problem,” NGCP president Anthony Almeda said during the same hearing.

“Ancillary service contracting will not solve this supply problem. New plants will,” he added.

Furthermore, he said the NGCP “has 100 percent contracted a healthy mix of firm and non-firm ancillary service contracts.”

Read Next
Pro-Duterte groups condemn Masbate mine explosion
EDITORS' PICK
SANTIS Delicatessen: The road to survival is sweet and savory
Gilas out to prove Korea win not a fluke; Tab fires back at ‘lucky shot’ remark
LOOK: ‘Low vaccination’ turnout in 4 Manila sites after no walk-in policy
Eleazar: PNP open to ICC probe but PH judicial process is working
Internet: Overcoming pandemic lockdowns
Piolo Pascual: The Ultimate Heartthrob continues to level up
MOST READ
Lacson or Pacquiao a possible presidential candidate for NPC – Sotto
Palace: Face shields no longer needed to be worn outdoors
Duterte to issue memo on face shields this week
DFA opening 10 satellite offices to boost passport services
Don't miss out on the latest news and information.