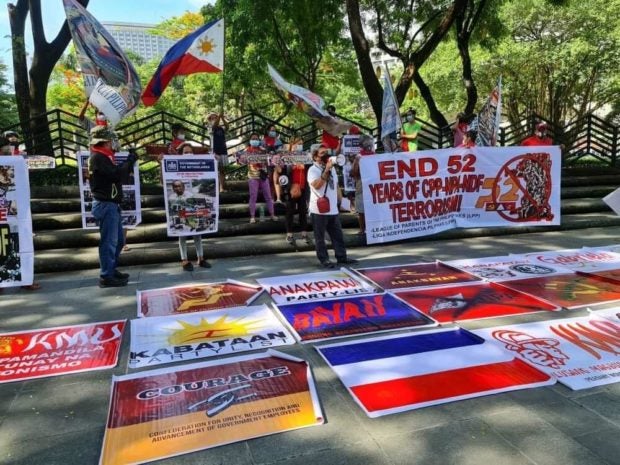 Pro-Duterte groups hold a protest action in front of the Dutch Embassy in Makati. CONTRIBUTED PHOTO

The groups held a protest action in front of the Dutch Embassy to also hold the Dutch government accountable for “tolerating” Communist Party of the Philippines (CPP) founder Joma Sison’s “terroristic actions.”

According to the group, the killing of Kieth Absalon was a “terroristic” and “barbaric” act of the CPP and the NPA.

“We strongly condemn such terroristic and barbaric act perpetrated by the CPP-NPA-NDF under the leadership and supervision of Joma Sison who has been residing for decades in your country,” the Liga Independencia Pilipinas and League of Parents of the Philippines said in a joint statement as they held a protest in front of the Dutch Embassy.

On Sunday morning in Barangay Anas, Masbate, Far Eastern University football player Kieth Absalon, his cousin Nolven Absalon, and a 16-year-old nephew were biking when a landmine exploded, killing the two adults and wounding the kid.

The CPP and the NPA have already took “full responsibility for the tragedy,” declaring “deep remorse” for the “untimely and unnecessary” deaths of two noncombatants.

“This is completely unacceptable to peace-loving Filipinos. Despite declaring  “deep remorse” for the “untimely and unnecessary” deaths of two noncombatants we will never forgive these atrocities,” he said.

“We will seek justice,” he added.

The groups further said that they hold the Dutch government just as “culpable” and “much guilty” as the CPP-NPA-NDF and Sison.

“You have tolerated his (Sison) actions and terroristic war by allowing him to stay in your country. Aren’t you shame? Aren’t you conscientious about it?” the groups said.

Together with the two groups in the protest are the Melchora Womens Partylist, Youth Power Against Destabilization and Terrorism and Duterte Youth Partylist.