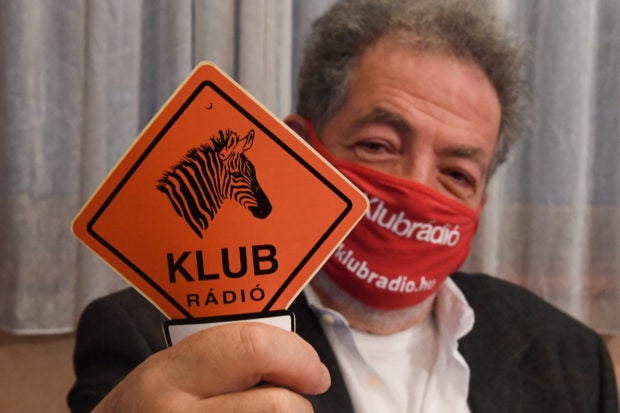 Chairman of the independent Hungarian radio station, the ‘Klubradio’ Andras Arato shows a Klubradio logo in their headquarters in Budapest on February 9, 2021. AFP

BRUSSELS — The European Commission on Wednesday launched a case against Hungary for forcing a leading independent radio station often critical of Prime Minister Viktor Orban off the air.

The Klubradio station has had to broadcast only online since February after it lost a court appeal to keep its broadcast license.

In September, the state media regulator said Klubradio repeatedly infringed administrative rules, and in March awarded the radio frequency to an outlet whose owner is allied to Orban.

The station’s fate has attracted international attention, with the European Commission and the United States expressing concerns that its disappearance from the airwaves will further damage media freedom in Hungary.

Brussels said it has now formally launched an “infringement procedure” — which could lead to legal action — against Budapest over the case.

“The Commission believes that the decisions of the Hungarian Media Council to refuse renewal of Klubradio’s rights were disproportionate and non-transparent and thus in breach of EU law,” an EU statement said.

“The Commission also considers that the Hungarian national media law has been applied in a discriminatory way in this particular case.”

Vera Jourova, the EU’s commissioner for values and transparency, said Brussels had “warned the Hungarian authorities and asked them to find a solution so that Klubradio could continue broadcasting”.

“They did not act. We now launch an infringement procedure against Hungary for failing to comply with EU telecoms rules,” she wrote on Twitter.

Klubradio, which began broadcasting in the 1990s, had to fight a series of legal battles to stay on air soon after Orban’s right-wing government came to power in 2010.

For several years, it operated on rolling short-term licenses, which the station said made attracting advertisers difficult.

The powerful NMHH, whose heads are close to Orban’s ruling Fidesz party, insists it is not politically driven.

In recent years most independent outlets have either gone out of business or been bought by government allies while receiving lucrative flows of state advertising.