Iraqis give blood in hope of identifying mass grave victims 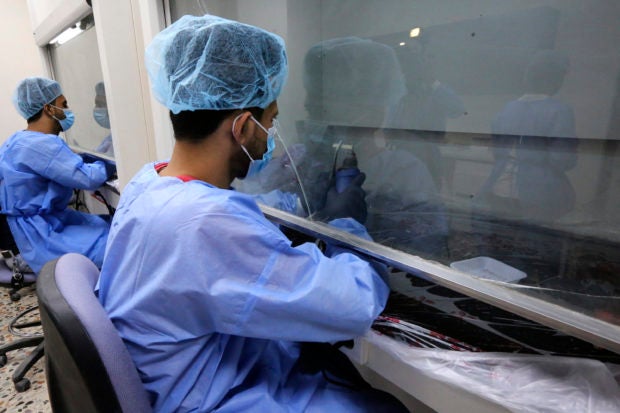 Iraqi forensic experts analyze blood drawn blood from families of Iraqis whose bodies were found in mass graves in the village of Badush, northwest of the city of Mosul, when it was in the hands of the Islamic State group, to match it with their remains for identification, on June 9, 2021 in Baghdad. AFP

BAGHDAD — Dozens of Iraqis gave blood samples in Baghdad on Wednesday as the country carries out a campaign to identify hundreds of victims of the Islamic State group found in a mass grave.

The Badush prison massacre was one of the worst crimes IS carried out after it seized control of a third of Iraq in a lightning offensive in 2014.

In June that year, IS fighters attacked the prison, located in the country’s northwest, freeing Sunnis and loading the remaining 600 mainly Shiite inmates onto trucks, before driving them to a ravine and shooting them.

The mass grave, discovered after Iraqi forces retook control of the area in March 2017, is one of dozens the extremist group left behind in its rampage of brutality, local officials say.

Abbas Muhammad, whose son Muhannad was imprisoned in Badush following his arrest in 2005 by US forces, was one of those giving blood samples on Wednesday morning in the hope of knowing the fate of loved ones who disappeared after the massacre.

“I need an answer to give me peace after 17 years of not knowing whether my son is alive or dead,” he told AFP.

Doctor Yasmin Munzer, head of the mass graves section at Baghdad’s forensic office, said that 100 families had given samples in the capital, while dozens of others had done so in four southern provinces.

DNA from the remains of the victims will be compared with the samples of their presumed relatives.

“Five other provinces still need to carry out samples” before the identification process can begin, she told AFP.

IS, declared defeated in Iraq at the end of 2017, left behind more than 200 mass graves that could contain up to 12,000 bodies, according to the UN.

Iraq has for years been trying to identify remains from violent episodes in its recent history, and is still discovering mass graves from the regime of dictator Saddam Hussein.

It is not an easy task, as remains have often been burned and have been exposed to other elements over the years.

UN investigators have concluded there is “clear and convincing evidence” that IS committed “genocide” in Iraq.