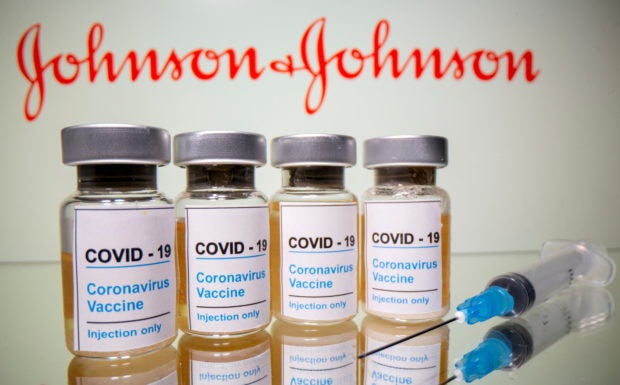 FILE PHOTO: Vials with a sticker reading, “COVID-19 / Coronavirus vaccine / Injection only” and a medical syringe are seen in front of a displayed Johnson & Johnson logo in this illustration taken October 31, 2020. REUTERS/Dado Ruvic/File Photo

“One million J&J vaccines are headed to our partners in the Republic of Korea. With these doses we’re ensuring the safety and readiness of ROK and U.S. forces. The friendship between our two countries runs deep, especially in times of great need,” spokesman Ned Price said in a post on Twitter.

Infections are decreasing in South Korea, which has so far administered enough doses to inoculate about 9% of its population, Reuters data show.

On Thursday, Biden unveiled how his administration would distribute 25 million surplus doses across the globe, including 6 million shared among South Korea, Mexico, Canada, India, the West Bank and Gaza, among other partner nations and United Nations frontline workers.

South Korea, a key U.S. ally in Asia, was the second nation to be welcomed by Biden when he hosted South Korean President Jae-in at the White House last month.

Biden on Thursday said the United States was sharing its doses to end the pandemic, which has killed more than 3.7 million people worldwide, not to extract political favors.