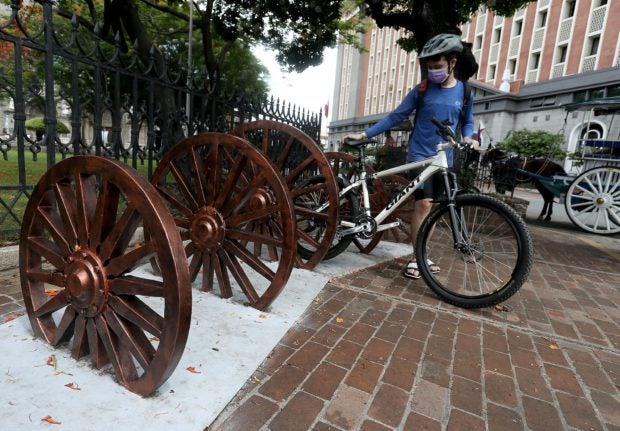 CYCLING ONE’S WAY THROUGH THE PANDEMIC A rider parks his bicycle alongside an art installation entitled “Kalesa,”which also serves as a bike rack in Intramuros, Manila. —RICHARD A. REYES

MANILA, Philippines — Anxious about the new normal? Why not make it a “better normal” by going on two wheels — and being kinder to the environment — for your daily commute?

Celebrating World Bicycle Day on Thursday, a group of cycling advocates called on the government to undertake permanent, postpandemic projects that will make urban areas friendlier to bikers.

For one, the Department of Public Works and Highways (DPWH) should implement a provision in its budget program this year requiring the setup of ‘’protected lanes’’ for bikers and pedestrians on roads and bridges, according to the Move As One Coalition.

In a statement, the group urged individual cyclists or clubs to lobby their local DPWH offices and remind district engineers about “Special Provision No. 23” and apply it to their communities.

It said the department had been given a budget of P275 billion this year to implement that provision.

On a positive note, the group noted that the DPWH had so far completed 427.4 kilometers of protected bike lanes in Metro Manila, Cebu City and Davao City using a P1.3-billion allocation from the Bayanihan 2 stimulus program.

According to the Department of Transportation, the national government is expected to finish a total of 535 km of bike lanes in the three areas at the end of the year.

While biking infrastructure should protect cyclists from accidents, the coalition also reminded bikers and motorists alike to be mindful of road safety, as “people on bicycles are more likely to get injured or killed in a road crash than people in motor vehicles.”

“We all share the road and need to look out for one another. So slow down, especially when turning a corner. And give cyclists at least 1 meter of space when passing them,” the Move as One Coalition said.

The group said biking is “a great way to learn the contours of your city and country.”

“The Philippines remains far from a paradise for bikers, yet many Filipinos and Filipinas—health-care workers, blue- and white-collar employees, entrepreneurs and other essential workers—have been cycling their way through the pandemic,” it added.

Biking, it said, “is here to stay and will be part of our better normal.”