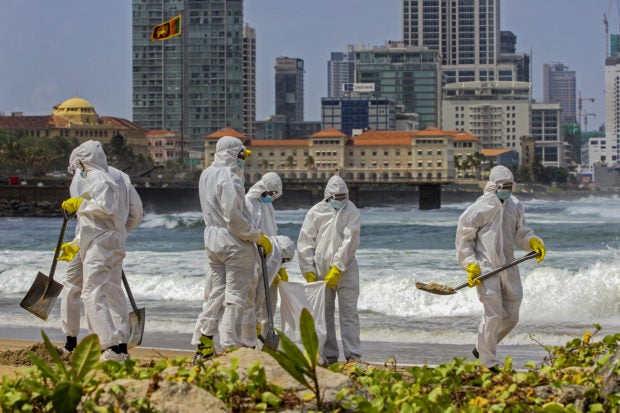 Members of Sri Lankan Navy remove debris washed ashore from the Singapore-registered container ship MV X-Press Pearl, which has been burning for the 12th consecutive day in the sea off Galle Face Beach in Colombo on May 31, 2021. AFP

COLOMBO — A fire aboard a ship that triggered Sri Lanka’s worst-ever marine ecological disaster was finally extinguished Tuesday after a 13-day international operation, the navy said.

The near two-week inferno prompted a mammoth clean-up operation as huge volumes of microplastic granules from the Singapore-registered ship’s containers inundated 80 kilometers (50 miles) of beach.

The unprecedented pollution forced a fishing ban and saw thousands of troops deployed to scoop tonnes of burnt plastic from beaches.

Sri Lankan navy divers were also deployed to examine the hull below the waterline to check for any cracks, officials said.

The fire was first reported on May 20 as the ship was about to enter Colombo port.

The blaze was initially contained, but strong monsoon winds fanned the fire, forcing the crew to evacuate on May 25.

Navy spokesman Captain Indika de Silva said the stern of the 186-meter (610-feet) long container carrier had gone down by about a meter because of the flooding.

“It is not unusual for the vessel to trim by aft (tilt to the rear) when water sprayed on deck settles in the engine room,” Silva told AFP.

He said the spraying of water was stopped to prevent further flooding, but some areas of the ship were still too hot to carry out a complete examination of the vessel.

Sri Lankan President Gotabaya Rajapaksa ordered officials to move the vessel from its anchorage near the port and move it to deeper waters in a bid to minimize further coastal damage, his office said.

“Representatives from a number of fields, including shipping and the environment, pointed out that the vessel was at risk of sinking,” the president’s office said.

“Their suggestion, then, was to take the vessel to the deep seas to minimize possible damage to the marine environment.”

Sri Lankan authorities fear an even greater disaster should the 278 tonnes of bunker oil and 50 tonnes of gasoil in the ship’s fuel tanks leak into the Indian Ocean.

Sri Lanka’s navy was joined by India’s coastguard and tugs brought in by SMIT to battle the flames, which destroyed most of the nearly 1,500 containers onboard.

The three-month-old ship had 25 tonnes of nitric acid and other chemicals as well as 28 containers of plastic raw material onboard, much of which fell into the sea.

Marine Environment Protection Authority chief Dharshani Lahandapura said they were still assessing the ecological damage, but believed it was the “worst ever in my lifetime”.

President Rajapaksa asked Australia on Monday to help with assessing the ecological damage to the island, one of the most bio-diverse countries in South Asia, his office said.

The MEPA chairman Lahandapura said the crew apparently knew of a nitric acid leak on May 11, long before the vessel entered Sri Lankan water en route to Malaysia and Singapore.

Sri Lanka Monday launched a criminal investigation into the fire and the marine pollution.

Police spokesman Ajith Rohana said the captain and chief engineer, both Russian nationals, had been questioned for 14 hours since Monday.

The third officer, an Indian national, was also questioned at length, he said, adding that a court had ordered Tuesday to impound the passports of all three pending investigations.

The ship was heading to Colombo from Gujarat, India when the blaze started, having previously visited Qatar and Dubai where the containers of nitric acid had been loaded.

Sri Lankan authorities suspect a leak of that acid triggered the fire.