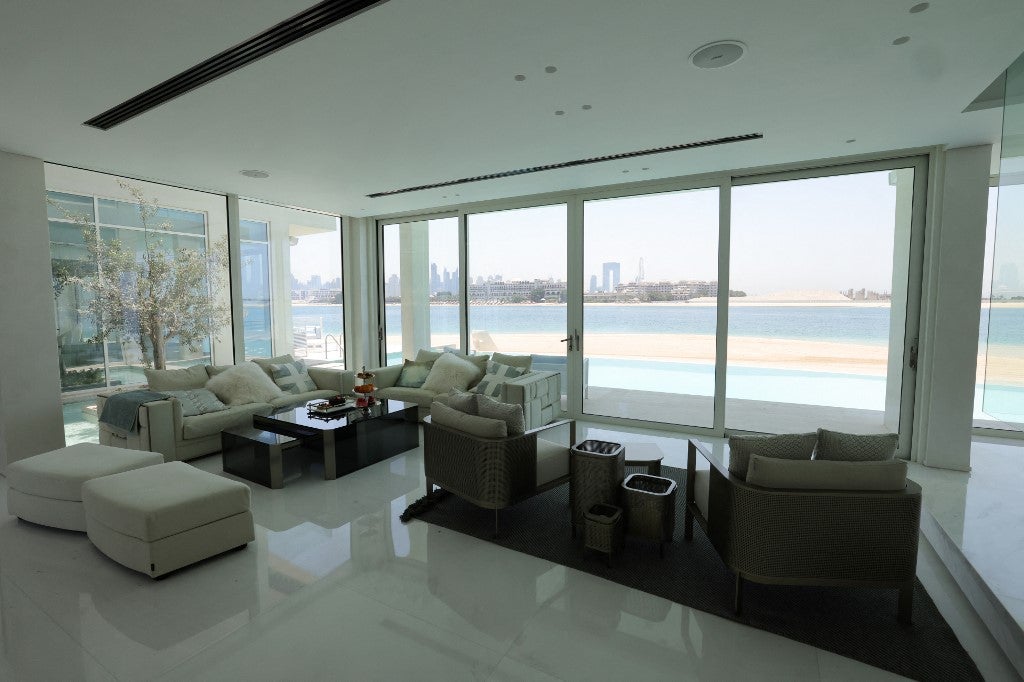 This picture shows the living room of a luxury villa for sale on one of the Palm Jumeirah man-made island, on the coast of the Gulf emirate of Dubai, on May 19, 2021. – Dubai’s property market is powering out of a six-year malaise as “lockdown dodgers” and wealthy international investors drive a buying frenzy that is breaking records and fuelling an economic recovery. (Photo by Giuseppe CACACE / AFP)

DUBAI — Dubai’s property market is powering out of a six-year malaise as “lockdown dodgers” and wealthy international investors drive a buying frenzy that is breaking records and fueling an economic recovery.

Luxury villas are the hottest segment in the market, with European buyers in particular seeking homes on Dubai’s signature Palm Jumeirah man-made island, as well as golf course estates.

Dubai’s rollercoaster property market, which had been in steady decline since 2014, went into flatline after Covid-19 hit last year and the emirate slammed shut its borders, said Zhann Zochinke, chief operating officer of consultancy Property Monitor.

“Then straight after that lockdown period we started to see transaction volumes increase, and they really haven’t stopped since,” he told AFP.

The Gulf emirate became one of the first destinations to reopen to visitors last July, pairing the open-door policy with strict rules on masking and social distancing, and an energetic vaccination program which has produced some of the highest inoculation rates globally.

Despite a surge in coronavirus cases in the new year after holidaymakers descended en masse, life has continued largely as normal with restaurants and hotels open, and few of the restrictions that have blighted life elsewhere.

“The lockdown dodgers from other countries? I think we’re seeing a lot of that there,” Zochinke said, adding that other draws were more relaxed residency rules and a decision to allow full foreign ownership of firms.

‘Not just a construction site’

The flood of arrivals has regenerated the tourism industry, long an economic mainstay of Dubai which has little of the oil wealth that powers its neighbors, and helped business activity recover to pre-Covid levels in April, according to IHS Markit.

“Travel and tourism firms recorded the most notable bounce in performance, amid increasing hopes of a rise in tourism activity later in the year, boosted by the rapid vaccine roll-out,” said the research firm’s economist David Owen.

After years of torpor when homeowners watched their equity drain away, the surge in luxury properties above 10 million dirhams ($2.7 million) has been striking, with 90 transactions in April compared to around 350-400 on a regular yearly basis, according to Property Monitor.

A mansion on the Palm has sold for 111.25 million dirhams, the highest price reached in years in the precinct which features 16 “fronds” lined with show-stopping houses and supercars parked in the driveways.

The highest-priced property now available on the block is a vast Italian-inspired modern villa positioned at the end of one of the fronds, complete with 180 degree beach frontage, which is being offered for 100 million dirhams.

After it languished on the market during the gloomy days at the height of the pandemic, the developers are hoping that one of the new breed of cashed-up Europeans will be tempted by the infinity pool, private cinema, and acres of marble and glass.

“I think people have started to realize that Dubai is not just a construction site anymore, which it was maybe 10 years ago when we had the most amount of cranes in the world,” said Matthew Bate, CEO of BlackBrick, one of the agencies representing the property.

“People are now looking at Dubai and saying — I’m going to make this my primary home. I can work from Dubai and still manage business in Europe or North America or Asia,” he said.

“So I think what Covid ultimately did, it opened the doors for us to the rest of the world.”

In a market where many fortunes have been made and lost, there is nervousness about whether the recent giddy rises can be sustained.

Sales of properties above 10 million dirhams rose 6.7 percent in April compared to the previous month, and 81 villas were sold on the Palm in April alone compared to 54 in all of 2020, according to Property Monitor.

Even with the remarkable gains, the market is still off its highs of 2014, and the apartment market is trailing far behind.

The financial services firm Morgan Stanley, however, said in a recent report that the rally isn’t likely to stop soon.

“Robust demand, peaking supply growth and long lead times for new projects could lead to a tighter-than-expected market over the next several years,” it said.

It credited “a wave of government reforms over the past 12 months, attractive mortgage rates, and a shift in demand patterns due to Covid-19”.