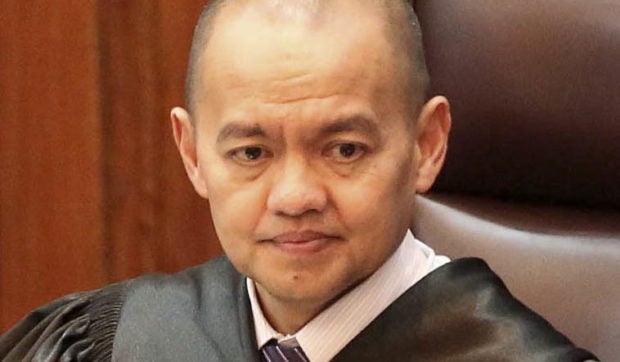 MANILA, Philippines — The impeachment complaint lodged against Supreme Court Associate Justice Marvic Leonen immediately faced a dead-end at the House of Representatives after the lower chamber’s committee on justice voted to dismiss it.

By a unanimous vote of 44-0, the members and ex-officio members of the committee dismissed the impeachment complaint filed by Edwin Cordevilla, secretary general of Filipino League of Advocates for Good Government.

It was initially announced that the vote count was 37-0 but the secretariat later provided an update that 44 lawmakers voted to junk the complaint.

Before the voting, discussions on the impeachment complaint revolved around the sufficiency in form and substance of the case.

Some lawmakers pointed out that the complaint was insufficient in form and substance since it lacked authentic records to support the allegations against Leonen.

Deputy Speaker Rufus Rodriguez said that allegations in the impeachment complaint should be based on personal knowledge of the complainant or based on authentic records.

However, the lack of certified true copies of attachments included in the complaint makes it “undeniably, purely hearsay,” as he pointed out several allegations in the complaint only cited news reports.

“On this particular point, it is clear that it is not based on the authentic record as required by our rules… All the annexes are all xerox copies and mainly coming from newspaper reports,” Rodriguez said.

“Therefore, this verified complaint, on the second requirement of authentic record, will not comply,” he added.

Rodriguez likewise questioned if the complaint was based on personal knowledge.

“A perusal of the complaint itself and the annexes would show that not one matter, not one annex is based on his personal knowledge,” Rodriguez said.

“It says my own personal knowledge and then what is being attached or being cited are newspaper and online reports of columnists or reports who wrote about these issues and therefore the first requirement that it is true and correct based on personal knowledge were not obtained in this complaint,” he added.

‘Mockery of the law’

“The COVID-19 pandemic is still raging in our country. People are dying every day, and we need all the time we have in Congress to legislate measures that will help our people fight this disease in our country to recover. Do we really need an impeachment during the pandemic? Is this really the right time to do this?” he said.

“That’s why I am fully supporting the dismissal of this impeachment complaint,” he added.

He noted that “the complainant is making a mockery of the law, and that this impeachment proceeding is an exercise in futility when we have more important things to do and bills to tackle.”

In his impeachment complaint, Cordevilla claimed that the magistrate “clearly lacks integrity because he failed to file his statement of assets and liabilities and net worth” for 15 years during his tenure at the University of the Philippines.

Leonen, who wrote the decision junking the electoral protest of Marcos against Vice President Leni Robredo, has said that Congress should not spend time on “false issues raised by some for clearly personal or vindictive reasons.” — with report from Cathrine Gonzales

Read Next
‘Tinkering’ with Charter should be a ‘last resort, not done on a whim’ – Poe
EDITORS' PICK
Focus on the moment with vivo Y33s now available in stores
UNIDO PH Vacancy Announcement: National Project Coordinator
Duterte party shuns ‘old rich’ donors
New COVID-19 cases plunge below 7,000
TUCP to Dole: Probe ‘no jab, no pay’ scheme
Live exceptionally with vivo and ZEISS’ X70 smartphone, now available in the PH
MOST READ
Tulfo bares talks with Robredo, Bongbong Marcos
Tulfo on Bongbong Marcos: Why would he apologize for the sins of his father?
Duterte party shuns ‘old rich’ donors
Fathers, sons, daughters
Don't miss out on the latest news and information.