‘Bato’ hits admin critics for ‘wanting war’ with China, yet against ROTC revival 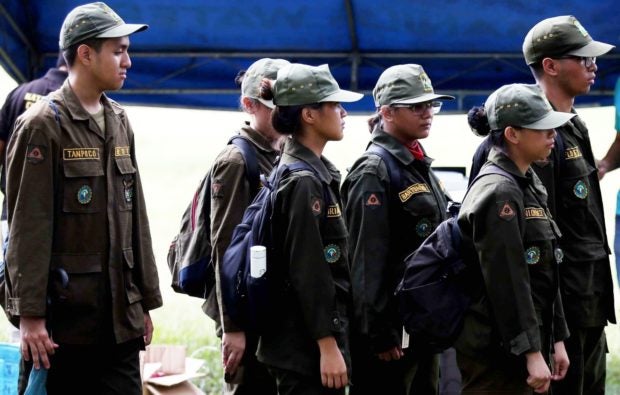 MANILA, Philippines — Senator Ronald “Bato” dela Rosa on Wednesday slammed those criticizing the Duterte administration for not playing tough with China, yet wouldn’t even support the revival of the Reserve Officers Training Corps (ROTC) program.

During the hearing of the Commission on Appointments on Wednesday, Dela Rosa said these critics appear to be “calling for war,” but are against the mandatory military education and training for students.

(We know the imminent threat coming from China… they are occupying parts of the West Philippine Sea but a lot of our fellow Filipino—old or young—want war. They really want it. They’re blaming the government for a supposedly ‘very weak stance’ against China and they really want war but they are against ROTC.)

The topic of reviving the mandatory ROTC program in schools resurfaced as Dela Rosa asked a military official, who is up for CA confirmation, regarding his stand on calls to revive such mandatory training for students.

(Do you think that mandatory ROTC should be revived so that whatever happens in the future, whether there’s a war or not, we are ready as a nation, not just as a military…the youth—whether females or males—we can mobilize them anytime if war wages on?)

(Do you think we really need, that it is very urgent to revive ROTC in our schools?)

In response, Palces expressed “strong belief” that mandatory ROTC should be brought back in schools.

“I strongly believe that the ROTC program should be revived in the schools… Even [if] ROTC is only held once a week, it instills discipline among the youth which is very needed for a strong country,” the AFP official said.

“And they (students) learn some lessons as far as military things are concerned and if ever push comes to shove, God forbid, we have a ready reserve who can assist the Armed Forces regulars in any capacity,” he added.

President Rodrigo Duterte has been urging Congress to pass the revival of the mandatory ROTC.

The ROTC program began in 1912 when the Philippine Constabulary commenced with military instruction at the University of the Philippines.

Calls to abolish the ROTC were fueled by the killing of University of Santo Tomas sophomore cadet Mark Welson Chua in 2001 after he exposed corruption in his school’s ROTC.