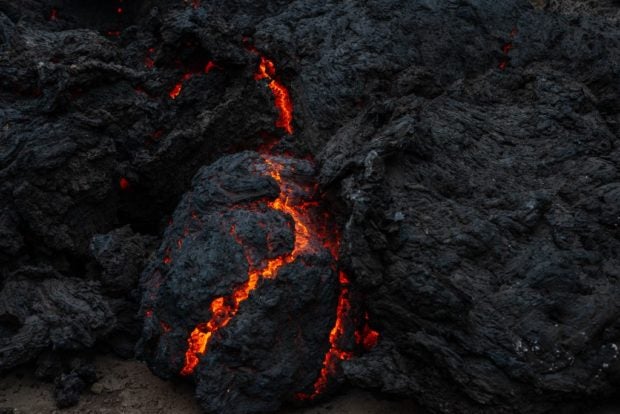 The smoldering lava from the Mount Nyiragongo eruption is seen in Goma on May 23, 2021. – A river of boiling lava came to a halt on the outskirts of Goma on Sunday, sparing the city in eastern DR Congo from disaster after the nighttime eruption of Mount Nyiragongo sent thousands of terrified residents fleeing in panic. Fire and strong fumes emanated from the blackish molten rock as it swallowed up houses, heading towards Goma airport on the shores of Lake Kivu. (Photo by Moses Sawasawa / AFP)

Goma, DR Congo — Two major cracks appeared on the ground in the eastern DR Congo city of Goma on Tuesday as powerful aftershocks from the Mount Nyiragongo volcano shook the area, an AFP reporter saw.

Cracks, measuring up to several hundred meters (yards) long and several dozen centimeters (roughly two feet) across in places, opened up as the city was hit by tremors from the volcano around a dozen kilometers (nine miles) away.

The longer crack ran from Mount Goma, which marks the city’s northern perimeter, to the main hospital and the banks of Lake Kivu.

The shorter crack, around 100 metres long, appeared near Goma airport, on the northeastern side of the city, on the surface of the main highway from Goma to Butembo.

Residents said they were worried about a further eruption after Nyiragongo sprang back into life on Saturday, spewing a flow of lava that reached the city’s outskirts, although there was no sign of any panic and some shops remained open.

“We don’t know what to do, everyone is confused, there’s no word from the authorities and things are moving around all over the place,” said Furaha Nyirere, who lives near the airport.