Unmanned supermarkets to the rescue in Sweden’s rural areas 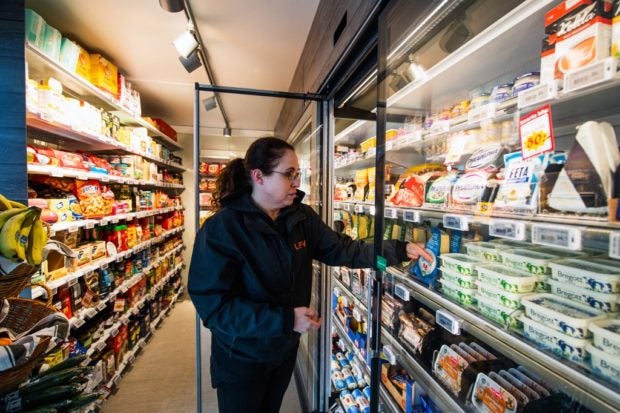 Store manager Domenica Gerlach works in the Lifvs unmanned supermarket store in Veckholm, a village of a few hundred people, about 80 kilometers from Stockholm, on May 6, 2021, near the city of Enkoping. One after another, grocery stores are shutting down in rural Sweden, leaving villagers to log miles to buy food. But a new type of shop has sprung up in their wake: unmanned supermarkets in mobile containers. Photo by Jonathan NACKSTRAND / AFP

ENKOPING, Sweden — One after another, grocery stores are shutting down in rural Sweden, leaving villagers to travel miles to buy food. But a new type of shop has sprung up in their wake: unmanned supermarkets in mobile containers.

In Veckholm, a village of a few hundred people 80 kilometers (50 miles) from Stockholm, the last grocery store closed more than a decade ago. Then, a year-and-a-half ago, even the little convenience store at the only petrol station locked its doors.

Villagers were left with no choice but to travel a half-hour by car to the closest supermarket.

But in July 2020, an automated, unmanned grocery store came to town.

In a container dropped in the middle of a field, open 24 hours a day, the 20-square-meter (215-square-foot) supermarket sells hundreds of items — and there’s no cashier in sight.

“Since a while back, there has been nothing in this area and I think most of us living here have really missed that,” said Giulia Ray, a beekeeper in Veckholm.

“It’s so convenient to have this in the area,” she told AFP, doing her own shopping and restocking the shop’s shelves with her honey at the same time.

Shoppers unlock the supermarket’s door with an app on their smartphone.

“We come here three times a week and buy stuff we need,” Lucas Edman, a technician working in the region for a few weeks, told AFP.

“It’s a little bit more expensive but it’s fine. It’s a price I can pay to not go to another store.”

He scanned his pizzas and soda on the app on his phone, which is linked to his bank account and a national identification system — an added anti-theft security, according to the store.

And it’s all done under the watchful eye of a single security camera.

In Sweden, the number of grocery stores — everything from superstores to small convenience stores — has dropped from 7,169 in 1996 to 5,180 in 2020, according to official statistics.

While the number of superstores has almost tripled in 24 years, many rural shops have closed down, often due, like elsewhere in Europe, to a lack of profitability.

Daniel Lundh, who co-founded the Lifvs, has opened almost 30 unmanned stores in rural Sweden and in urban areas with no shops in the past two years.

He plans to open his first unstaffed supermarkets outside Sweden early next year.

Domenica Gerlach, who manages the Veckholm store, only comes by once a week to receive deliveries. She also manages three other shops, all of them mobile containers.

Peter Book, the mayor of Enkoping, the municipality to which Veckholm belongs, has only good things to say about the three container stores that have opened in his patch.

“It makes it easier to take a step to move there if you know you have this facility,” he said.

In Sweden, one of the most digitalized countries in the world, Lifvs, like its Swedish rivals AutoMat and 24Food which have also popped up in rural areas, benefits from a very wired population.

Ironically, the unmanned shops — plopped down in the middle of nowhere — also play a role as a “meeting place” for locals.

“You come here, you get some gas and you go inside and get something, and maybe someone else is here and you can have a chat,” Ray said.

The pandemic has also proven the stores’ usefulness, since no contact with other people inside the shop is necessary.

Because of Covid-19, only one person at a time is allowed inside the Veckholm store.

“My mother lives nearby as well and … this has been a shop she could actually enter during all this time. She hasn’t been (able to go) anywhere,” Ray said of her 75-year-old mother.

“This has been a salvation for her.”