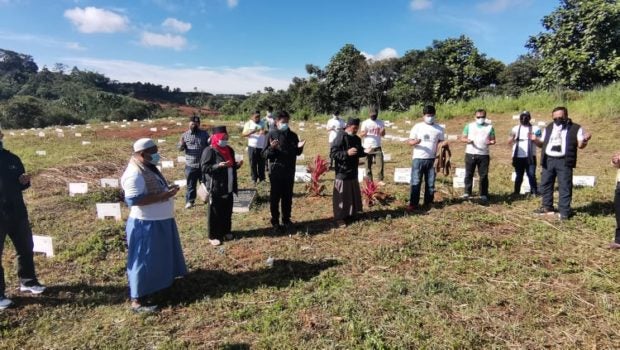 Marawi City civil society leaders remember and pray for those who lost their lives pr went missing during the 2017 siege. Four years ago, Islamic State-linked militants laid siege on the city which lasted for five months.  (Photo by Divina M. Suson)

MARAWI CITY – More than a dozen civil society leaders, most of them displaced from their homes in 2017, remembered those who perished and went missing as a result of the five-month siege in this city four years ago.

The commemoration was held at the Maqbara, a public cemetery where the remains of more than 300 unidentified persons retrieved from the battle zones were laid to rest.

At the cemetery, one is led to the graves through bamboo markers that contain only codes that jibe with the documentation of authorities.

Today, the wooden markers are now replaced with concrete ones, painted white, and the thick bushes that covered the cemetery cleared.

Around 20 families of the dead and the missing civilians attended the rites and expressed their sentiments over the delayed identification of the civilian victims and joined the solidarity prayer.

Four years ago today, hundreds of Islamic State-linked militants laid siege on the city, spawning a five-month long hostilities that destroyed its main commercial district, and led to the death of 168 soldiers and police officers, over 900 militants, and scores of civilians.