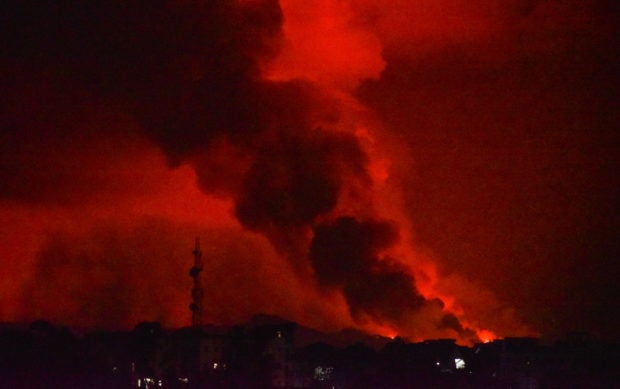 A general view shows smoke and flames at the volcanic eruption of Mount Nyiragongo near Goma, in the Democratic Republic of Congo May 22, 2021. (REUTERS)

As the red glow of the volcano, one of the world’s most active, tinged the nighttime sky above the lakeside city of about 2 million, some fled east toward the frontier with neighbouring Rwanda, while others escaped to the west.

Dario Tedesco, a volcanologist based in Goma, said new fractures were opening in Nyiragongo, allowing the lava to flow southward toward Goma after initially flowing east toward Rwanda.

“Now Goma is the target,” Tedesco told Reuters. “It’s similar to 2002. I think that the lava is going towards the city centre.”

“It might stop before or go on. It’s difficult to forecast,” he said.

A United Nations source said all U.N. aircraft had been evacuated to the city of Bukavu to the south and Entebbe in neighbouring Uganda.

Power was also out across much of Goma and phone lines were busy.

In Kinshasa, the capital, Prime Minister Jean-Michel Sama Lukonde, convened an emergency meeting, where the government activated an evacuation plan for Goma.

“We hope that the measures that have been taken this evening will allow the population to reach the points that were indicated to them in this (evacuation) plan,” government spokesman Patrick Muyaya said in comments broadcast on national television.

Volcano watchers have been worried that the volcanic activity observed in the last five years at Nyiragongo mirrors that in the years preceding eruptions in 1977 and 2002.

Volcanologists at the Goma Volcano Observatory, which monitors Nyiragongo, have struggled to make basic checks on a regular basis since the World Bank cut funding amid embezzlement allegations.

In a bulletin on May 10, the observatory said there had been increased seismic activity at Nyiragongo earlier in the month.