66 tons of tilapia turn belly up in Ilocos Sur 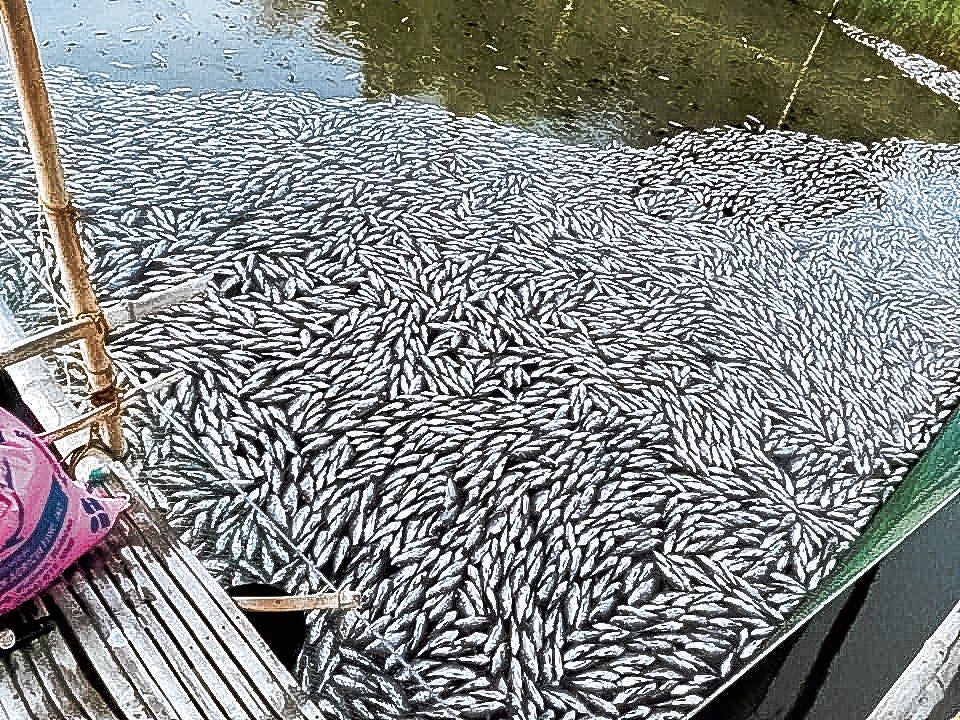 SORRY SIGHT Thousands of tilapia, worth P7.8 million, float dead after a fish kill struck a river in San Vicente, Ilocos Sur, on May 15 and 16. —PHOTO COURTESY OF ARIS MANGOBA

Rogelio Rualizo, president of the San Vicente fishermen’s association, said the fishkill on May 15 ravaged about 66 tons of tilapia that were seen floating in Bantaoay River.

About 39 fish cage operators in Barangay San Sebastian were affected by the incident, according to data from the town’s agriculture office.

Based on the initial assessment of the Bureau of Fisheries and Aquatic Resources (BFAR), the oxygen in the river dropped to a “critical level,” likely due to the lack of water flow in the fish cages, which were aggravated by the extreme heat in the past weeks, said Martin Allayban, officer in charge of BFAR in Ilocos Sur.

“This is the fifth fish kill occurrence in San Vicente since January, and the second time only for the month of May. A massive fish kill also happened in 2018,” Allayban told the Inquirer in an interview on Wednesday.

Since January, over 170 fish cage operators under the town’s aquaculture industry had lost at least P13 million due to other incidents of fish kill based on local agriculture data.

Allayban said the fish cage operators in the village had been warned, and they were encouraged by BFAR to conduct a “force harvest” after a fish kill took place in the town from May 1 to May 3.

He said only 10 percent of a potential area of a body of water should be dedicated to aquaculture.

But the river had seen an “overpopulation” of fish cages, which resulted in its water getting stagnant and the waterways getting blocked, Allayban added.

He said they had asked the local government to review their aquaculture policies, particularly on limiting the number of fish cage operators within the allowable limit.

Maricel Pasion, a fish cage operator in the village, appealed for help from the provincial government after assessing the extent of the damage caused by the fish kill.

“[To] our beloved leaders of municipality of San Vicente and the provincial government of Ilocos Sur, please, hear our crying fishermen. At this time, they need our help,” Pasion wrote on Facebook on May 16.

Some fish cage operators were able to retrieve a “small quantity” of tilapia but most of the fish had to be immediately buried as they were not fit for human consumption, Allayban said.