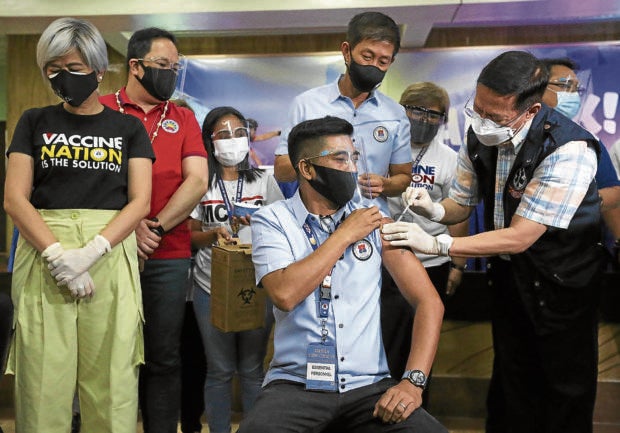 QUEUE FOR SINOVAC STARTS HERE Some preregistered front-liners at the Unibersidad ng Maynila get their Sinovac jabs from Health Secretary Francisco Duque III on the 27th anniversary of the Commission on Higher Education on Tuesday. —MARIANNE BERMUDEZ

MANILA, Philippines — The huge crowd that turned up for shots of the US-made Pfizer vaccine in hopes of being better protected against COVID-19 could ironically become a “superspreader” event, health reform advocate Dr. Tony Leachon warned on Tuesday.

Despite the experts’ and government’s constant reminder for the public to take any vaccine offered to them, the Filipinos’ preference for certain vaccine brands manifested itself in the “octopus-like” queues in sites offering Pfizer shots, and the near-empty venues where Sinovac or AstraZeneca vaccines were being rolled out.

One factor driving the “huge crowd is the brand of the vaccine, due to the science-based approach and real world experience of success [in] Israel, the United Kingdom and the United States,” Leachon said.

Hearing that the Pfizer vaccine would be offered in Manila and Parañaque cities, thousands of people, most of them walk-ins without confirmed vaccination appointments, crowded a mall in Parañaque City and ignored social distancing protocols.

The lack of crowd control and confusing instructions on the ground also led to hours of waiting and unnecessary exposure among vaccinees, some of them elderly and wheelchair-bound.

The Department of Health (DOH) has reminded the public to register and get a confirmed appointment before showing up at the vaccination site, as there is a limit to the number of vaccines that can be administered in a day.

“We need to improve our communication to the public [so they’d know] that they need to wait for their schedule for vaccination (through text messages),” DOH National Capital Region Director Gloria Balboa said at the Laging Handa online briefing on Tuesday.

According to Balboa, the process and schedule for vaccination must be followed because the Pfizer vaccine has to be handled more delicately compared to other vaccines, so as not to render it unfit for use.

“There is a time for it to be thawed because it is sensitive to temperature. There is a certain number [of doses] that can be brought out for that day so we are stricter with the number [of recipients],” she said.

According to Secretary Carlito Galvez Jr., vaccine czar, the number of vaccines administered in the country has surpassed three million, with 3,114,847 shots given as of Monday.

On May 15, Galvez said the Philippines had set a new record of 120,529 jabs administered in a single day.

He added that simulations for Metro Manila conducted with the help of the country’s top two fast food chain operators showed that once vaccine supply becomes steady starting June, herd immunity could be achieved in 180 days, or by Nov. 27 this year.

Galvez said that for the entire country, there should be 500,000 jabs a day, with 15 million monthly supply of vaccines to achieve herd immunity.

Next: A4 and A5 categories

The official also announced that the Cabinet has approved his recommendation to start vaccinating front-line personnel of essential sectors and indigent people under the A4 and A5 categories, respectively.

Depending on assurance from the National Task Force Against COVID-19 (NTF) on a steady supply of vaccines, Galvez said he would announce next week when the vaccination of the A4 and A5 groups would start.

NTF deputy chief Vince Dizon said the vaccination of “economic front-liners” was expected to be expedited because some employers have purchased their own vaccines.

He said the NTF vaccine cluster and the DOH would come out with guidelines in the coming days and that private companies needed to coordinate with local government units so that qualified recipients can be identified and registered.

At the House of Representatives, three lawmakers have sponsored a bill that seeks to authorize more medical personnel, including dentists and medical technologists, as vaccinators to facilitate a faster rollout of the vaccine “to prevent the possible expiration of the doses.”

Aside from doctors and other medical professionals, trained pharmacists and midwives are currently allowed to administer the vaccine.

Of the three million doses administered so far, Galvez said about 2.36 million were given as first dose and about 751,000 were given as second dose. Around 1.66 million of the recipients were health-care workers under the A1 category, followed by around 741,000 from the A2 category or senior citizens, 705,000 from A3 or those with comorbidities, and around 9,100 from A4, or essential workers.

If minors are included, Galvez said the government would be buying 202 million vaccine doses, up from the original plan of 148 million doses intended only for the adult population.

The government has P82.5 billion to procure vaccines, of which P58 billion are loans from the Asian Development Bank, the World Bank and Asian Infrastructure Investment Bank. Galvez said the government had so far paid for 4.5 million Sinovac doses and made advance payments for the Gamaleya and Moderna vaccines.

With Manila having only 900 slots for the Pfizer jab, thousands lined up as early as 3 a.m. There were 18 other sites on the same day for Sinovac, but queues were a lot shorter throughout the day.

“How can they text people from all over the city to come to a vaccination site… and have them fight over a limited number of doses, treating vaccination like it was Wowowee?” journalist Kenneth Guda said, referring to a popular game show, to describe how “chaotic” the vaccination program was.

“People were excited about the Pfizer (vaccine),” Manila Mayor Francisco “Isko Moreno” Domagoso said on Tuesday, adding that to fast-track the vaccination, the city began accepting walk-in vaccinees as long as supplies lasted.

The long queues were “a setback,” Domagoso admitted, “but as long as we prepare and try to [keep] them organized, we could hit our goal [of] herd immunity,” he said.

In Parañaque City, thousands turned up at Ayala Mall by the Bay where the city government offered 2,000 Pfizer doses on Monday.

Parañaque resident Ana Santos, 58, and her husband, both of whom have underlying health conditions, received a text message confirming their schedule and turned up at the site at 7:30 a.m., only to find an “overwhelming” crowd.

“It was like an octopus,” Santos said, adding that she was concerned about the elderly and the wheelchair-bound being unnecessarily exposed to the virus.

“These people have decided to stay home for more than a year, only to be exposed [at the site],” she added.

Volunteer doctor Albert Domingo, also a health systems specialist, suggested that maybe Pfizer could be scheduled alongside other brands. “When a vaccinee shows up without a Pfizer appointment and he or she is eligible, perhaps the site could counsel and offer the other brands plus a nonmonetary incentive,” he said.