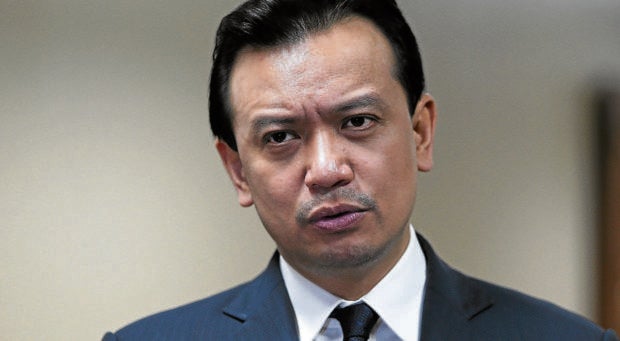 Trillanes also slammed the claims made by former Senate President Juan Ponce Enrile on Monday night at the Palace that questioned his back-channeling with China that supposedly led to the Philippines’ “losing ground” in Panatag (Scarborough) Shoal.

Enrile had been invited to give his views on the matter, apparently as part of Malacañang’s efforts to counter criticism that the President is being soft on China.

“[The President] tries to come up with this version of a story because he wants to divert [attention from] his incompetence for his failure to stop the occupation of areas in the [WPS],” Trillanes said.

According to Trillanes, he was tasked by then President Aquino to do backdoor talks with China after the latter’s first choice, then Budget Secretary Florencio Abad, begged off for lack of time.

“As a former soldier, and this is the President giving me the mission, I obliged. The bottomline is that this task required the full trust of the principal, that the designated messenger will perform faithfully and protect the interests of the country,” he said.

Enrile told Mr. Duterte that he had cautioned Aquino in 2012 against Trillanes’ involvement. “We don’t know what Trillanes discussed with the people he was talking to in China,” he said he told Aquino.

Enrile commended Mr. Duterte for his kid-glove approach to China, saying it was “the right thing to do.”

“We need a friendly approach here, not a hard, assertive and aggressive approach. If China misunderstands us, the security and interests of our people, our economy, will be on the line,” the 97-year-old former senator told the President, adding:

But eight years ago, as Senate President during the Aquino administration, Enrile was singing a different tune, according to the book “Rock Solid: How the Philippines Won its Maritime Case Against China” by award-winning journalist Marites Vitug.

In the book for which Enrile was a chief source, Vitug wrote of a crucial meeting attended by Aquino, Enrile, Trillanes and Cabinet members in 2012, when the Philippines and China were at a standoff at Scarborough Shoal.

Quoting Enrile, Vitug wrote: Aquino asked whether to confine the dispute with Beijing to a bilateral level, or “to involve our allies and go multilateral.” Enrile advised Aquino to “assert [the Philippines’] rights and consult its allies without forgoing bilateral talks.” The majority at the meeting also voted to “internationalize” the dispute, which later led to the filing of the case at the arbitral tribunal.

In 2016, the Philippines won the arbitral award that upheld its sovereign rights in its exclusive economic zone and rejected China’s claim to almost the entire South China Sea.

The standoff at Scarborough Shoal began in April 2012 when Chinese ships blocked the path of a Philippine vessel to prevent the arrest of Chinese fishermen poaching sharks and collecting rare clams and corals in the lagoon.

Trillanes, one of Mr. Duterte’s most vocal critics, downplayed criticism on why he, a former military man, was tasked to back-channel with China.

“There should not be any issue because any Filipino citizen can be appointed; besides, as a former Navy officer, I am very familiar with Scarborough because that was my area, and I believe that [familiarity] worked to our advantage,” he said.

Trillanes said his familiarity with the shoal allowed him to argue that simultaneous withdrawal by both parties was not possible because of the small width of the opening.

He said his task was confined only to Scarborough, with the objective to “deescalate and reduce the number of ships” there.

“Many Filipinos, including Duterte, are confused by pinning the blame on me for the occupation of islets in the Spratlys, which is hundreds of miles from Scarborough,” he said.

Trillanes said he held a total of 14 meetings with the Chinese delegation—seven meetings in the Philippines and seven in China.

He said the back-channeling accomplished its mission, as it paved the way for the withdrawal of some 180 Chinese ships from the shoal.

“When I retire, I can probably tell the world that this is my biggest accomplishment in political life,” he said.

Trillanes corrected Enrile’s story that he bypassed then Ambassador to China Sonia Brady in his back-channel talks.

“This is the biggest hole in Enrile’s story. They are probably not aware that Ambassador Brady arrived in Beijing in late July or early August, just as I was already wrapping up my mission with China,” Trillanes said.

“[When] we were having the talks, there was no ambassador to China. But [when] she arrived in Beijing, I briefed her and gave her full disclosure on the details of the negotiations,” he said.

Trillanes refused to accept that the Philippines had lost Scarborough Shoal, and denied that he had ordered Philippine Navy ships to withdraw from the area.

“In 2012, it is on record that there were about 80-100 Chinese ships there, but now, there’s none. China was not able to take over this area, so what’s preventing [Duterte] from sending [the Navy] there to protect the interests of the country?” he said.

Asked who had ordered the Philippine ships to withdraw, Trillanes said: “You can ask the Philippine Coast Guard officials back then. I think they are still alive.” —With a report from Krixia Subingsubing INQ