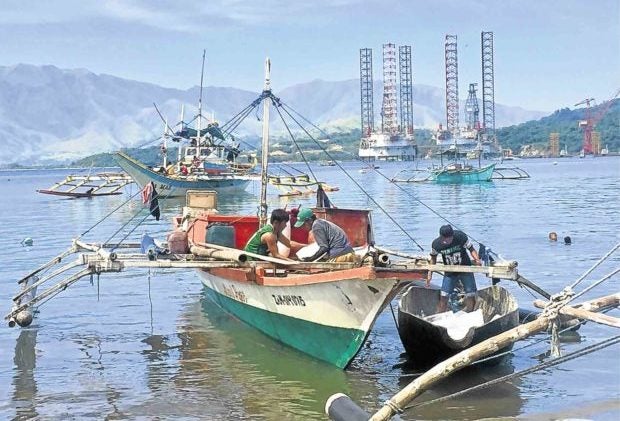 FILE PHOTO: In this December 2018 photo, fishermen from Subic town in Zambales province lament that their fishing trips to the disputed Scarborough Shoal in the West Philippine Sea remain uncertain despite the country’s friendly ties with China. JOANNA AGLIBOT

SAN ANTONIO, Zambales, Philippines — A group of lawyers in this province facing the West Philippine Sea (WPS) on Monday, May 17, urged President Rodrigo Duterte to “publicly uphold” the Constitution by retracting his “defeatist” statements on China’s illegal activities in the WPS.

In a statement of concern, the Integrated Bar of the Philippines (IBP)-Zambales chapter specifically called on Duterte to retract his public statement that China is in possession of the WPS.

The lawyers’ group also referred to the president’s recent remark that the Arbitral award “is a mere scrap of paper, and should be thrown in the wastebasket.”

It said such statements could be interpreted as an admission that the government is no longer interested in the disputed territories.

They cited Art XII, Sec. 2 of the Philippine Constitution that says: “The State shall protect the nation’s marine wealth in its archipelagic waters, territorial sea, and exclusive economic zone, and reserve its use and enjoyment exclusively to Filipino citizens.”

“When a part of our country’s territory is taken against our will by the People’s Republic of China and our countrymen, particularly the fishermen, are threatened with force from exclusively enjoying our nation’s marine resources, the President is solemnly bound to uphold, defend and protect his countrymen and the integrity of our national territory,” the lawyers said.

They said Zambales fisherfolk are being directly affected by China’s occupation of the Scarborough Shoal (also known as Bajo de Masinloc or Panatag Shoal), some 220 kilometers off the province’s coast.

Local fishermen recently told the Inquirer that they have been losing about 60 percent of their usual catch due to the presence of Chinese vessels in Scarborough Shoal and elsewhere within the country’s exclusive economic zone.

On May 10, retired Supreme Court Justice Antonio Carpio said Filipino fishermen could no longer get “galunggong” (round scad) from their traditional fishing ground.

“The fish in the exclusive economic zone, under the Constitution, is exclusively for Filipino citizens. The President said he has an agreement with President Xi Jinping of China. They can fish in the West Philippine Sea. The Chinese have the largest fishing fleet in the world, about 200,000 fishing vessels. Our fishermen are complaining that they no longer catch any fish,” Carpio said.

Last month, the non-government organization Agham-Advocates of Science and Technology for the People condemned China’s incursion in the WPS.

“The presence of around 220 Chinese fishing vessels believed to be Chinese militia in the Julian Felipe Reef and other parts of the West Philippine Sea as well as the presence of illegal structures in Union Bank in the Kalayaan Group of Island are clear violations of our national sovereignty,” it said in a statement

Agham warned of “possible consequences not only to the environment but also to fisheries production and fisherfolk welfare.”

“China’s rising aggression in the past five years of the Duterte administration involved many cases of harassment and extortion on Filipino fisherfolk as well as environmental destruction, including poaching of giant clams and reclamation and building of military bases on reef areas,” it said.