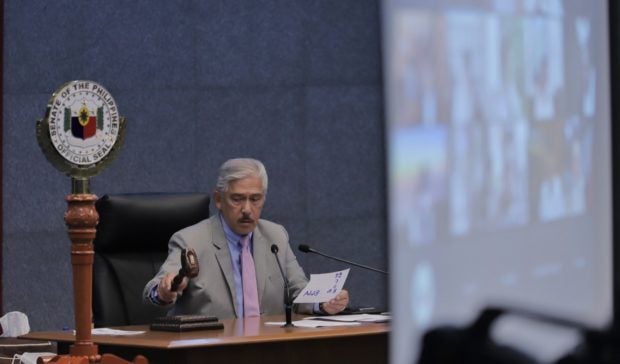 MANILA, Philippines — Senators have agreed to hold plenary sessions on Thursdays to have more time to deliberate on and approve priority measures, the Senate leadership said.

“Approved. We agreed,” Senate President Vicente Sotto III told INQUIRER.net Monday when asked if his colleagues agreed with his proposal to have more session days.

At present, the Senate holds plenary sessions – where the chamber deliberates and votes on measures – from Mondays to Wednesdays only.

Zubiri likewise said the Senate is aiming to pass the proposed Public Service Act and the Foreign Investments Act as well as the Government Financial Institutions Unified Initiatives to Distressed Enterprises for Economic Recovery (GUIDE) bill.

Also among the bills the senators agreed to pass are the measures seeking to reset the first regular elections in the Bangsamoro Autonomous Region in Muslim Mindanao (BARMM) and to extend the amnesty for estate tax as well as several other legislations which are already on second reading.

“We will try our very best to pass the three fiscal bills pushed by the DOF and the resetting of the BARMM,” Zubiri said.

“I commit that I will put in the agenda every day the priority bills whether the chairman likes it or not,” he added.

Congress resumed sessions on Monday following a two-month break and will have less than three weeks to tackle measures before it adjourns sine die from June 5 to July 25.