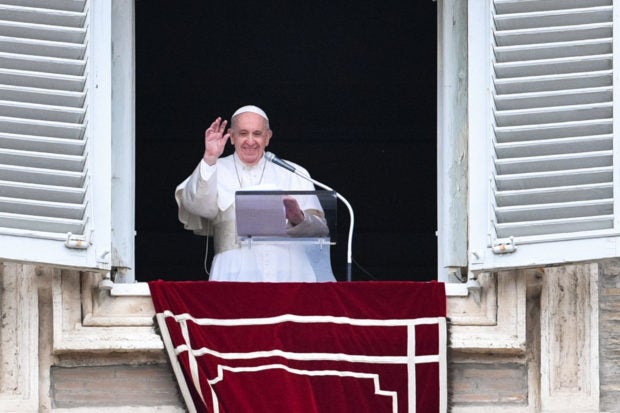 Pope Francis waves from the window of the apostolic palace overlooking St. Peter’s Square, during the weekly Angelus prayer followed by the recitation of the Regina Coeli on May 16, 2021, in The Vatican. (Photo by Tiziana FABI / AFP)

VATICAN CITY — Pope Francis on Sunday said the loss of innocent lives in violence between Israel and Palestinians was “terrible and unacceptable”, warning that the latest conflict could get even worse.

“In these days, violent armed clashes between the Gaza Strip and Israel have taken over, and risk degenerating into a spiral of death and destruction,” said the pope following his Sunday Regina Caeli prayer.

“Numerous people have been injured, and many innocents have died. Among them there are also children, and this is terrible and unacceptable,” the 84-year-old pontiff said.

“I ask myself: where will hatred and revenge lead? Do we really think we will build peace by destroying the other?”

Francis’ comments, addressed to a crowd in Saint Peter’s Square at the Vatican, came after the pontiff held a special mass for Myanmar on Sunday morning.

During mass, he repeated calls for an end to bloodshed in the country roiled by a violent crackdown on civilians by the military junta, urging its people not to lose hope.

Francis, who often speaks about current events in his Sunday addresses from the window of the Apostolic Palace, also urged for calm in the Middle East.

“I appeal for calm and, to those who have responsibility, to stop the din of arms and to walk the paths of peace, also with the help of the international community,” he said.