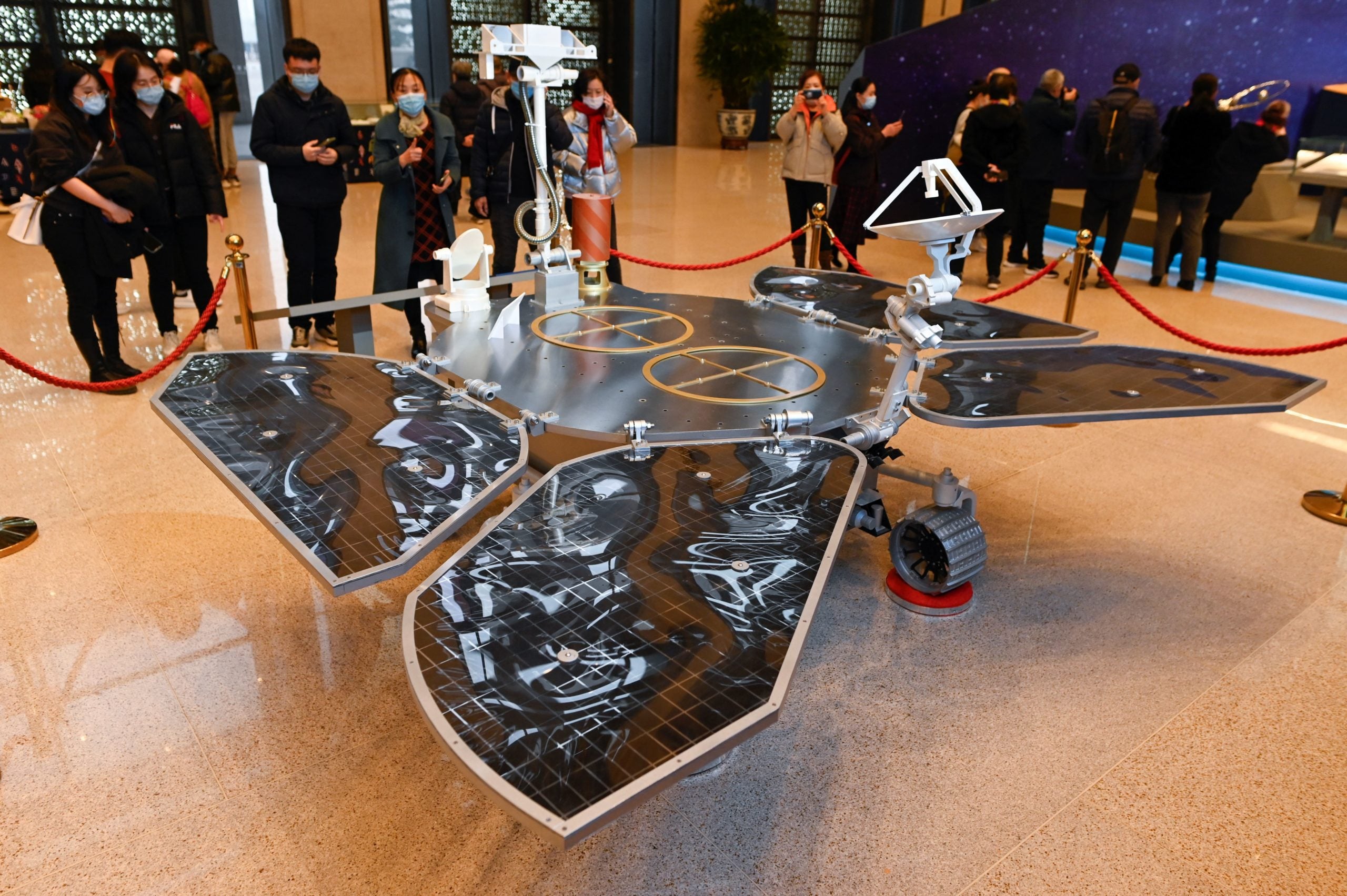 A model of the Tianwen-1 Mars rover is displayed during an exhibition at the National Museum of China in Beijing on March 4, 2021. (Photo by WANG Zhao / AFP)

BEIJING — Anticipation mounted Friday for the landing on Mars of China’s “Zhurong” rover, a few months behind America’s latest probe to the Red Planet, as Beijing presses ahead with its increasingly bold space ambitions.

The launch of China’s Mars probe Tianwen-1 last July marked a major milestone in its space program, which Beijing views as a sign of its rising global stature and technological might.

The spacecraft, which entered Mars’ orbit in February, has now reached a “crucial touchdown stage” as it prepares to land its rover in a vast northern lava plain known as the Utopia Planitia, the state-run tabloid Global Times said Friday.

Chinese officials have been tight-lipped on the timing of the touchdown but the landing window of mid-May to mid-June has opened, according to China’s National Space Administration.

Speculation about a Saturday landing has been rife on social media after a top spaceflight expert estimated the rover — named after a mythological Chinese fire god — would reach the surface in the morning Beijing time.

Ye Peijian, a member of the Chinese Academy of Sciences and a key researcher on China’s lunar program, said during a Thursday lecture at the Beijing Institute of Technology that the rover would land at about 7:11 am Saturday Beijing time, local media reported.

The tricky landing has been called the “seven minutes of terror” because it happens faster than radio signals can reach Earth from Mars, meaning communications are limited.

Several US, Russian, and European attempts to land rovers on Mars have failed in the past, most recently in 2016 with the crash-landing of the Schiaparelli joint Russian-European spacecraft.

The latest successful arrival came in February when US space agency NASA landed its rover Perseverance, which has since been exploring the planet.

The US rover launched a small robotic helicopter on Mars which was the first-ever powered flight on another planet.

It is expected to spend around three months there.

If successful, China will be the world’s first country to carry out an orbiting, landing, and roving operation during its first mission to Mars.

It will become just the third nation to safely touch down on the Red Planet after Russia and the United States.

The country has come a long way in its race to catch up with the United States and Russia, whose astronauts and cosmonauts have decades of experience in space exploration.

China successfully launched the first module of its new space station last month with hopes of having it crewed by 2022 and eventually sending humans to the Moon.

Last week a segment of the Chinese Long March 5B rocket disintegrated over the Indian Ocean in an uncontrolled landing back to Earth.

That drew criticism from the United States and other nations for a breach of etiquette governing the return of space debris to earth, with officials saying the remnants had the potential to endanger life and property.