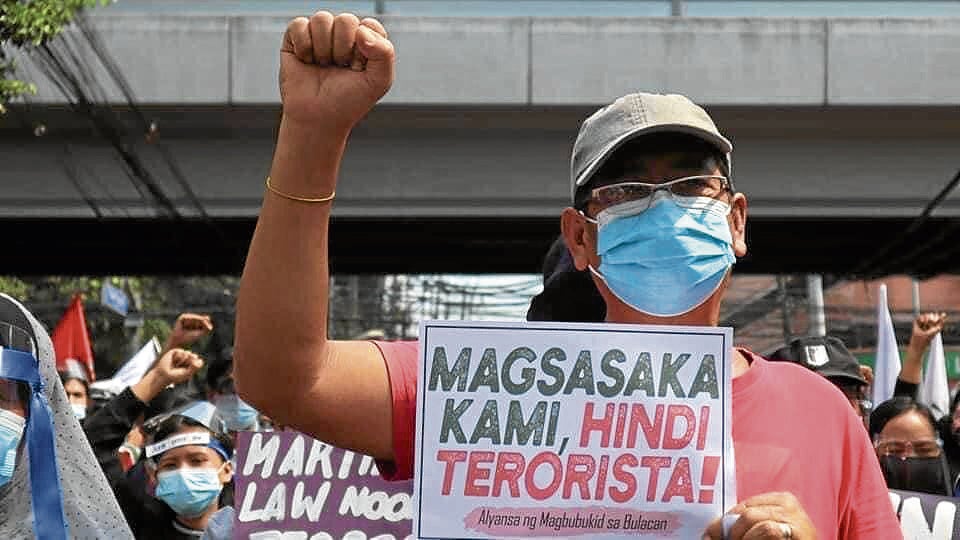 CITY OF SAN FERNANDO — The Department of Health (DOH) has begun tracing the contacts of farmer-leader Joseph Canlas among inmates and personnel at a jail in Angeles City where he was detained before he died of complications from COVID-19 on Tuesday.

His death came more than a month after he was arrested on March 30 for what he called “trumped-up” charges for illegal possession of firearms and explosives.

The DOH’s regional epidemiological and surveillance unit (Resu) in Central Luzon wanted to confirm the spread of infection by testing those who Canlas had mingled with, especially those who are considered high-risk, according to Resu officer Rosanne Rosell.

“I am not sure if [Canlas] contracted COVID-19 here,” Supt. Rebecca Tiguelo, warden of the district jail, told the Inquirer in a phone interview on Tuesday.

The jail is managed by the Bureau of Jail Management and Penology (BJMP).

“Did he acquire the virus in the hospital? I am baffled also,” added Tiguelo, a registered nurse.

According to her, the police submitted an X-ray result and medical certificate confirming that following his March 30 arrest, Canlas underwent 14 days of quarantine at Camp Olivas in this Pampanga capital before he was committed to the BJMP jail on April 15.

She said Canlas stayed at the jail’s quarantine for 22 days until May 6 and had his medicines for hypertension and diabetes all the time.

Canlas was among 93 inmates occupying the quarantine, she added.

On May 7, he was transferred to Selda 25, made from a shipment container, where 82 inmates shared space.

He stayed there for two days before he was taken to Rafael L. Lazatin Medical Center at 8 p.m. on May 8 due to what Tiguelo described as “low level of oxygen saturation.”

She said Canlas did not show any symptoms for COVID-19. But his daughter, Jenelle Buan, said she had a video chat with her father at 5 p.m. on May 8 and he informed her that he experienced recurring fever.

Canlas was moved to JBLMGH at 4 a.m. on May 9 after his condition deteriorated. He died around 7 a.m. on May 11 and a subsequent test showed he was positive for COVID-19.

“The arrest of Joseph Canlas by the police based [on] questionable warrants, his unjust detention in congested facilities, lack of testing and the delayed medical attention from BJMP authorities despite his complaints of symptoms and his preexisting comorbidities, all contributed to his untimely passing,” part of the resolution read.

They said that under the Duterte administration, “at least 400 political prisoners jailed on trumped-up charges face the same prison conditions amid the pandemic.”

Read Next
Canada ethics probe clears Trudeau
EDITORS' PICK
Smart brings KCON:TACT especially 4U to subscribers from June 19 to 27
EDITORIAL: OFWs save the day
Incoming 40 million doses of Pfizer COVID-19 vaccine key to herd immunity – Galvez
PAL to ax some long-haul flights to slow bleeding
Gilas out to prove Korea win not a fluke; Tab fires back at ‘lucky shot’ remark
Smart celebrates all kinds of ‘#SimplyLove’ for Pride Month
MOST READ
Handcuffed for 123 days, Ukraine couple splits
An open letter to Senator Bato
1Sambayan should be more inclusive
PAL to ax some long-haul flights to slow bleeding
Don't miss out on the latest news and information.