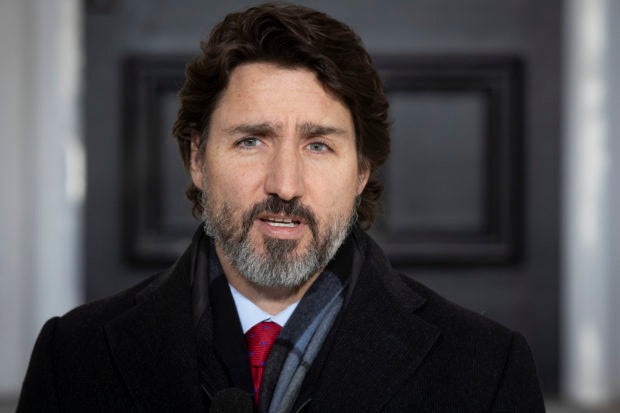 FILE PHOTO: In this photo, Canadian Prime Minister Justin Trudeau speaks during a COVID-19 briefing at the Rideau Cottage in Ottawa, Ontario, on December 18, 2020. (Photo by Lars Hagberg / AFP)

The conclusions come almost one year after Trudeau’s minority government came under political fire over a dubious contract, leading to then-finance minister Bill Morneau’s resignation and the undoing of the prominent WE Charity, started in 1995 seeking to abolish child labor.

Ethics Commissioner Mario Dion concluded in his report that “there was no conflict of interest on the part of Mr. Trudeau.”

However, his investigation found “an unusually high degree of involvement” between Morneau and WE, which Dion said also had unfettered access to the minister’s office.

This “amounted to preferential treatment,” according to the independent parliamentary watchdog. He also noted that Morneau and WE co-founder Craig Kielburger were friends.

And so, Dion concluded, the finance minister “should have recused himself from discussions” about tasking WE with doling out hundreds of millions of dollars in pandemic aid on behalf of the government.

The contract was canceled after it was revealed last spring that Morneau’s daughters worked for the WE Charity. One was a paid employee, the other a volunteer.

Trudeau, his wife, his mother, and his brother had also been involved in the charity’s activities for several years, including appearing on stage at youth events.

In March, Craig and Marc Kielburger told a parliamentary committee that WE paid Can$217,500 in fees to the Trudeaus and Can$209,620 to cover their expenses including flights and hotels.

But Dion found the prime minister was not involved in discussions with the Kielburger brothers that lead to the awarding of the contract to administer the Canada Student Service Grant, nor the government’s funding of WE’s Social Entrepreneurship program.

“Mr. Trudeau did not further his relatives’ private interests nor did he provide preferential treatment to WE,” Dion said.

“Although Mr. Trudeau has acknowledged publicly that he should have recused himself because of the appearance of a conflict of interest, there is no requirement to do so under the act in such circumstances.”

Trudeau was twice previously found guilty of ethics violations, for accepting a vacation on the Aga Khan’s private island, and for attempting to influence prosecution of the engineering firm SNC-Lavalin.

In the WE case, he maintained he did nothing wrong, saying on Thursday that the commissioner’s report “confirms what I have been saying from the beginning.”

“At the heart of this initiative was getting support for youth during this pandemic as fast as possible,” Trudeau said.