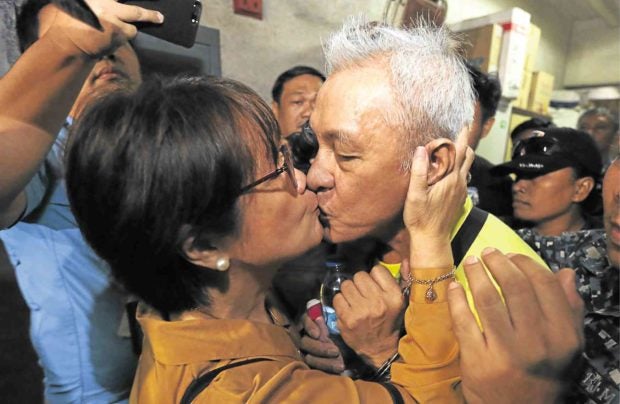 MANILA, Philippines — The spokesperson of Kapatid, a group of political prisoners’ relatives, slammed the Anti-Terrorist Council (ATC) after it tagged 29 people as “terrorists,” calling the resolution a “star chamber decision” meant to persecute targeted individuals.

Fides Lim, wife of long-time activist and political prisoner Vicente Ladlad, called the designation a “star chamber decision,” which refers to  any meetings held by a judicial or executive  body, or to a court proceeding that seems grossly unfair or that is used to persecute an individual.

“That is the very essence of the resolution that maliciously jumps the gun on the ongoing Supreme Court deliberations in order to sideswipe the final determination of the patent unconstitutionality of the Anti-Terrorism Act,” Lim quipped in a statement on Thursday.

This came after the ATC identified 19 alleged leaders of the Communist Party of the Philippines and the New People’s Army, as well as 10 alleged members of the Abu Sayyaf Group as “terrorists,” in two separate resolutions under the Anti-Terrorism Act.

Lim further defended her husband and vowed that she will do everything she can to defend her husband’s innocence.

“My husband Vicente Ladlad is not a terrorist or a criminal. His long record of activism, which includes political imprisonment for standing up for country and people, is an open book,” said Lim.

“I shall use all legal remedies available to defend his innocence, even if they may seem illusory and ineffective under the current dispensation,” she added.

The Kapatid spokesperson then sought the help of the Commission of Human Rights and the International Committee of the Red Cross to regularly check on the condition, and ensure the security and safety of the three political prisoners named in the resolution — Vicente Ladlad, Rey Claro Casambre, and Adelberto Silva — all of whom are currently confined in jail.

“I have reasons to fear for their lives because seven consultants of the National Democratic Front of the Philippines have already been murdered within the last two years,” said Lim.

She then appealed to the national government, not to harm anyone related to the tagged terrorists.

“You already put my husband in jail. Please don’t endanger my own safety, our family, our lawyers, or impede us from providing support as Vic is already old and very sick,” said Lim.