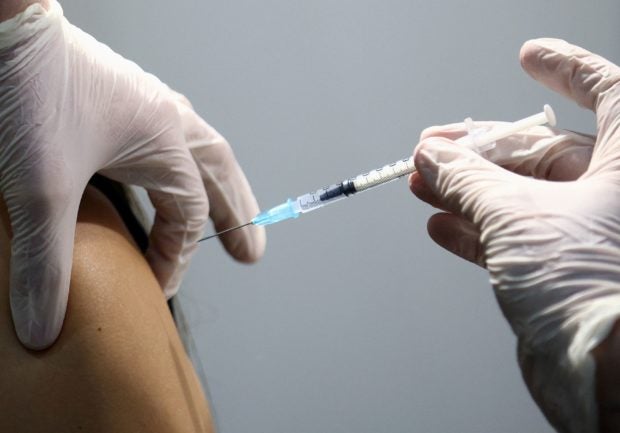 FILE PHOTO: A healthcare worker receives a dose of a Pfizer-BioNTech COVID-19 vaccine at Messe Wien Congress Center, which has been set up as a coronavirus disease vaccination center, in Vienna, Austria February 7, 2021. REUTERS/Lisi Niesner/File Photo

MANILA, Philippines — The national government may not use the recently delivered AstraZeneca and Pfizer-BioNTech COVID-19 vaccines to other recipients not included in the top 3 priority groups set by the World Health Organization (WHO)-led COVAX facility, an official of the Department of Health (DOH) said Wednesday.

Health Undersecretary Myrna Cabotaje said the AstraZeneca jabs, which were sourced through the COVAX facility, is only meant for health workers (A1), senior citizens (A2), and persons with comorbidities (A3).

Essential frontliners, which include market vendors, security personnel, and media workers, among others, are under the government’s A4 priority group, which is not among the top priorities under COVAX.

(The AstraZeneca and Pfizer jabs are provided only for A1, A2, and A3.)

(We cannot give the shots to A4 because it is not allotted for them.)

The WHO earlier urged the Philippines to follow its priority list of COVID-19 recipients, otherwise the COVAX may reconsider supplying vaccines to the country.

Cabotaje said essential frontliners may instead get other brands of the vaccine, particularly those developed by Chinese drugmaker Sinovac BioTech and Russia’s Sputnik V.

(They could use other vaccines such as Sinovac and those from Gamaleya. Other vaccines for the private sector are also bound to arrive so this can be done simultaneously.)

Cabotaje said 82 percent of 1.6 million out of the two million vaccines from the British-Swede drug firm AstraZeneca that was recently delivered to the Philippines have already been deployed to several provinces.

Meanwhile, 84,000 of the 193,050 vaccines developed by Pfizer-BioNTech that arrived in the country on Monday have already been deployed.

The Philippines has so far administered 2.5 million vaccines, with 514,655 individuals completing two doses while 2,025,038 received their first dose.

So far, 1.1 million health workers have been vaccinated against COVID-19 while only 406,000 senior citizens out of the 7.7 million target have received their vaccine, Cabotaje said.