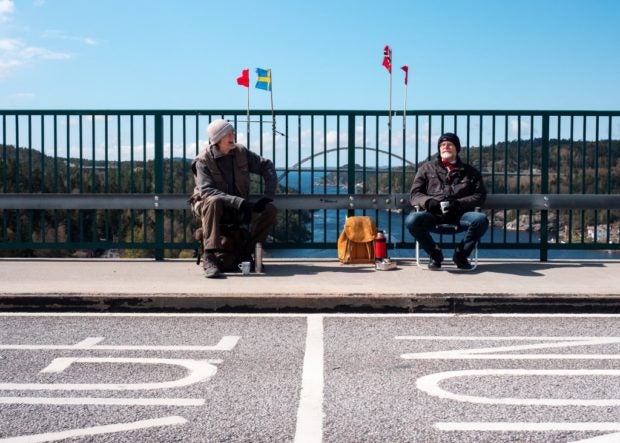 Pontus Berglund (L) sits on the Swedish side while his brother Ola sits on the Norwegian side of the old bridge of Svinesund with the respective country flags and the new Svinesund Bridge in the background, in Svinesund, Norway and Sweden, on May 1, 2021. They haven’t been allowed to have each other over for a year because of Covid. So come rain or shine, two 73-year-old Swedish twins have met every Saturday, each on their side of the border, on a bridge that links Norway and Sweden. Photo by Petter BERNTSEN / AFP

SVINESUND, Norway — They haven’t been allowed to have each other over to their homes for a year now because of Covid. So come rain or shine, two 73-year-old Swedish twins have met every Saturday, each on their side of the border, on a bridge that links Norway and Sweden.

Every week, Ola and Pontus Berglund each keeps well behind a thin, yet impassable line on the ground, toting camping chairs, thermoses, sandwiches — and plenty of good cheer.

“We’re not allowed to cross the border. I have to stay one metre (yard) away on my side and he has to stay back one metre on his side,” Ola explains, the little Norwegian and Swedish flags they’ve attached to the bridge fluttering in the wind.

“So basically there has to be two meters between us,” he says, pushing his chair back, suddenly aware that he is too close.

At his feet, painted on the road, is a simple white line, the words “Norge” and “Sverige” on either side.

The pandemic has put a halt to the identical twins’ weekly visits to each other’s homes.

Ola lives in Halden, in southeastern Norway, where he moved almost 40 years ago for love, while Pontus lives a half-hour drive away in the southwestern Swedish town of Stromstad.

Instead, they come together here, at a more or less respectful distance, on the old Svinesund bridge that straddles a fjord between the two countries.

They’ve celebrated their 72nd and 73rd birthdays this way on April 20.

“It’s very strange but it’s become a need, a pressing need, because we used to see each other every week and we wanted to continue that,” says Pontus from the Swedish side.

“The pandemic hasn’t stopped us from seeing each other and for us, that’s a victory.”

While the local restrictions have changed over the months as the virus situation has evolved, the border has remained closed.

The closure has angered Norwegians — many of whom own summer homes in Sweden, where life is cheaper — to such an extent that they sued the Norwegian state to get it to lift the mandatory quarantine required when they return home.

The few motorists who use the bridge usually smile or wave at the two grey-bearded gents sitting in their chairs.

Ola, a former nursing assistant who now spends his time making scenery for a theater, and Pontus, an artist and amateur ornithologist, have become local celebrities, with some people driving up to five hours just to take their photograph.

“That’s not very important to us. The important thing to us is to be able to get together and talk about whatever we want,” says Ola, sporting a red bow tie “because it’s May 1st”.

From their privileged perch, the two have, on occasion, found themselves in the role of benevolent smugglers — like the day when they delivered a puppy born in Sweden to its new family in Norway.

That’s their fondest memory, they say.

In more than a year, they’ve only missed their weekly rendezvous three times — because of stubborn police who wouldn’t let them onto the bridge.

Otherwise, they’ve kept to their schedule through blizzards or heatwaves, simply dressing for the weather.

Before the vaccination rollout, many elderly reported feeling a sense of isolation during the pandemic, as a result of having to shield themselves from the virus.

“Each meeting has been a little party,” says Pontus, who is divorced. “For me who lives alone, it’s really important to see Ola. Without that I’d be depressed.”

Does he miss hugging his brother?

“Yes,” he says with a contagious laugh.

“So sometimes I hug myself — since we’re identical.”