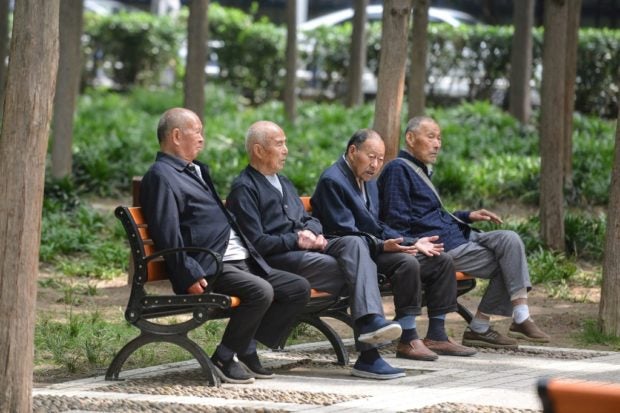 Elderly people rest at a park in Fuyang in China’s eastern Anhui province on May 12, 2021. Photo by STR / AFP

BEIJING — The number of retirees in China is set to rocket to around a third of the population, meaning fewer workers and more dependents — a demographic time bomb for the world’s second largest economy.

Here is a look at some of the big questions facing China as its citizens get older:

How many elderly does China have?

The number of people in China currently aged 60 or over is about 264 million, or about 18 percent of the population, according to this week’s census data.

But by 2050 this is set to increase to nearly a third of the population.

That compares to only around 19 seniors per 100 workers in India — the world’s second-most populous country after China — by the same year, according to the Pew Research Center.

Why is the population aging so fast?

China maintained a one-child policy for decades, which led to a much higher proportion of elderly people in the population and a shrinking workforce.

Although the policy has been relaxed in the last few years, this has not prompted a baby boom as policymakers had hoped.

The birth rate in 2019 was 10.48 per 1000, the latest figures from the National Bureau of Statistics show — far below India’s youthful population with a birth rate of 17.64, according to the World Bank.

How does it affect families?

Caring for the elderly places a strain on the working population, most of whom have no other siblings to share the burden with.

Beijing is planning to start gradually raising the pension age — currently 55 for women and 60 for men — to start tackling the demographic challenge.

But this in turn has an impact on working parents, many of whom rely on retired elders to look after their children.

The “grey-haired” economy is estimated to reach nearly $900 billion this year, according to iiMedia Research.

A McKinsey China Consumer 2021 report found a “strong willingness” to travel among 78 percent of retirees, who will also be armed with the latest tech.

What is the cost?

Currently the senior care market is underdeveloped and can be expensive.

But Beijing has been trying to spur investment, and the market is expected to reach a value of 13 trillion yuan ($2 billion) by the end of the decade.

A quarter of China’s GDP could be from elderly care costs by 2050, health officials have said — potentially overtaking real estate as the country’s biggest industry.