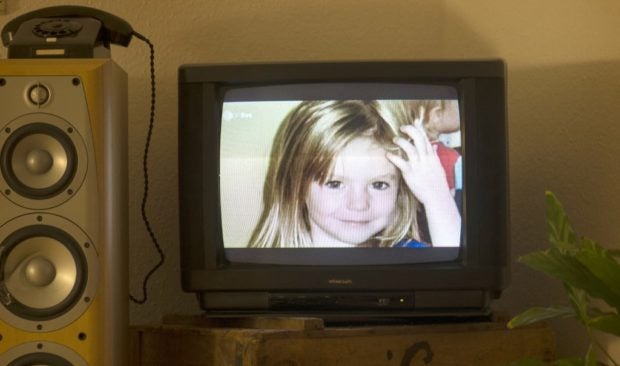 A photo of British girl Madeleine McCann aka Maddie is displayed on a TV screen at an apartment in Berlin, on October 16, 2013 during the broadcast of German ZDF’s “Aktenzeichen XY” programme. Photo by JOHANNES EISELE / AFP

LONDON — The parents of missing British girl Madeleine McCann are marking the 18th birthday of their daughter on Wednesday, just over 14 years since she disappeared on holiday in Portugal.

Madeleine or “Maddy”, as she is known in Britain, vanished from her family’s apartment in the Algarve holiday resort of Praia da Luz in 2007.

The disappearance, just days before her fourth birthday, sparked a massive search effort — though no trace of her has ever been found — and an international media frenzy.

At the time, the now-defunct News of the World tabloid offered £1.5 million ($2.1 million, 1.7 million euros) for information leading to Madeleine’s return and advertised the reward on a huge inflatable billboard.

A 2011 inquiry into press standards heard that the then-editor of the UK’s Daily Express newspaper decided the Madeleine McCann story was the only one he was interested in putting on the front page.

Despite the high-profile nature of Madeleine’s disappearance and media coverage since, Wednesday’s anniversary is expected to be a muted affair.

A source close to the family told AFP the McCanns were very private people and would only comment if there was a fundamental development in Madeleine’s case.

Her parents’ priority, they said, was to protect Madeleine’s younger brother and sister from the media spotlight, so they were only currently updating the public through their official website.

A week before Madeleine’s birthday, in a message coinciding with the 14th anniversary of her disappearance, Kate and Gerry McCann wrote of the years that had been “lost or stolen” with their daughter.

They added they “hang on to the hope, however small, that we will see Madeleine again”.

German investigators have identified a convicted sex offender, named in the press as “Christian B.”, as a prime suspect in the case.

German prosecutor Hans Christian Wolters told AFP that the authorities had “several proceedings being brought against the suspect, but in all cases we do not yet foresee an end to the investigation”.

Reports in the British press earlier this month claimed that police in Germany had hoped to charge him with a 2004 rape, carried out only a 30-minute drive from where Madeleine went missing, within three months.

Wolters said, however, that the three-month time frame was “unfortunately a false report”.

“Christian B.”, who is suspected of raping an Irish tour representative, is currently serving a seven-year sentence in a prison in Hanover, northern Germany, for the rape of a 72-year-old American in Praia da Luz in 2005.