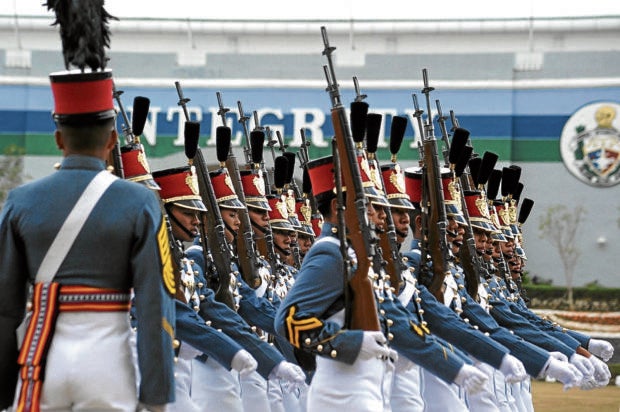 FUTURE OFFICERS Clean and well-pressed uniforms for classroom lectures, outdoor training, parades and other occasions are important to Philippine Military Academy cadets in Baguio City as they prepare to become officers of the Armed Forces of the Philippines. This photo of a parade and review at Borromeo Field in Fort del Pilar was taken in 2016. —EV ESPIRITU

BAGUIO CITY—The people who have kept the uniforms of Philippine Military Academy (PMA) cadets clean, starched and pressed have complained to the city council that they were unceremoniously sacked and replaced by the military school in the middle of the COVID-19 pandemic last year.

Addressing the council during its session on Monday, the Baguio Benguet Laundry Service Cooperative (BBLSC) claimed that the military school had not granted them a service extension even until December 2020.

The group was told that it would be replaced by a Pampanga-based laundry firm in September that year.

“Some of us no longer renewed our business licenses this year when we lost (the cadets as clients) and could not cope with the pandemic … Eighty employees lost their jobs,” said Byron Joseph Latonero, the cooperative’s chair.

Sample collection records showed that the eight groups collectively charged as much as P1.2 million for a month in 2019.Contract, standard rate

Some of them have been washing cadet uniforms since 2006 and 2007, starting out as informal arrangements, and were surprised when told that their services were no longer needed, Latonero said.

But the PMA merely set its house in order by requiring only one group providing the service for the cadets, said PMA lawyer, Lt. Col. Maria Estela Esteban, who spoke during the virtual council session.

Esteban said the new laundry service provider was bound by a formal contract with a standard rate, unlike in previous years when laundry charges fluctuated.

The PMA, every year, trains about 1,100 cadets who spend part of their monthly P35,000 allowances and stipends on laundry.

“Cadets are not permitted to wash their own clothes at their barracks,” Esteban told the council.

She said the academy had received complaints about the quality of work provided by the groups which used to provide the laundry service.

The PMA had also locked down its campus last year to protect the cadets, she added.

“Because of the pandemic, we deemed it necessary to regulate the entry and exit of people at Fort del Pilar,” Esteban said.

The PMA subsidized the cadet’s laundry expenses until 2015 when the cadet corps assumed this obligation.

The contract with the Pampanga-based laundry firm was with the cadet corps, not the PMA, and is good for only a year, Esteban said.

Councilor Betty Lourdes Tabanda advised BBLSC to prepare and offer its service after the current contract lapses.The Pampanga contractor was initially provided a twice weekly schedule for collecting and delivering the cadets’ uniforms inside the PMA.

But given the risks under a public health crisis, the PMA put up a laundry station inside the school which the contractor now rents so it can assign 35 workers on campus, Esteban said. INQ