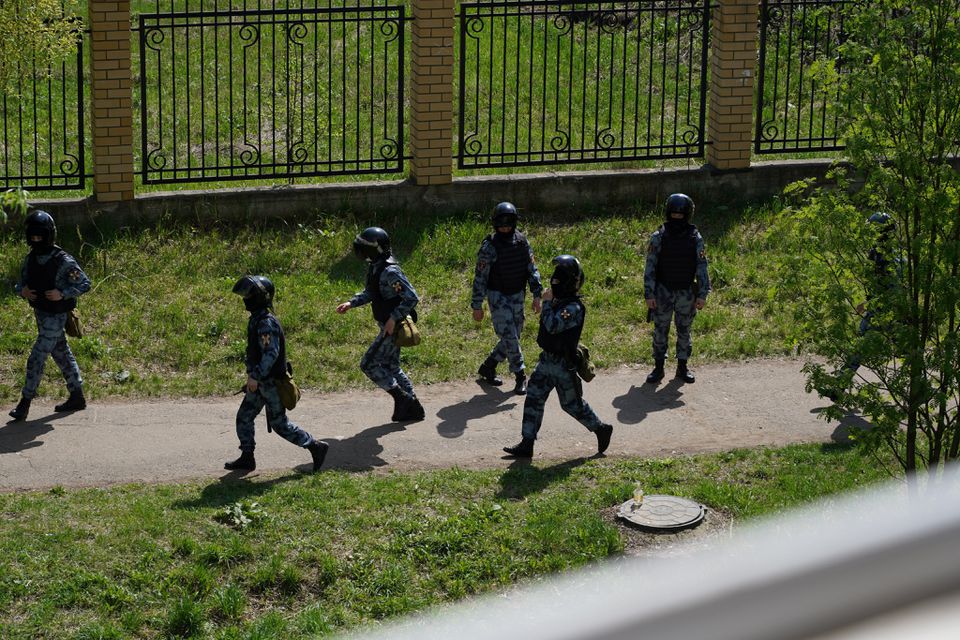 Tactical team responds to a deadly shooting at School Number 175 in Kazan, Tatarstan, Russia May 11, 2021 in this image obtained from social media. Courtesy of Max Zareckiy via REUTERS

MOSCOW — At least 11 people have been killed and many more wounded after one or more gunmen opened fire in a school in the Russian city of Kazan, the RIA news agency reported on Tuesday, citing the emergency services ministry.

Two children could be seen leaping from the third floor of the four-story School Number 175 as gunshots sounded, in a video filmed by an onlooker that was circulated by RIA.

RIA said one 19-year-old gunman had been detained and that an explosion had been heard at the school. Footage posted on social media showed a young man being pinned to the ground outside the school building by a police officer.

Footage also showed emergency service vehicles parked outside the school, with people running towards the building.

It was not clear whether any other shooters remained at large. Nor was it immediately clear what the motive for the attack was.

School shootings are rare in Russia. One of the last major shootings of its kind took place in Russian-annexed Crimea in 2018 when a student at a college killed 19 before turning his gun on himself.

Kazan is the capital of the Muslim-majority region of Tatarstan and located around 450 miles (725 km) east of Moscow.

Read Next
Panic and prayers: the day Pope John Paul II was shot
EDITORS' PICK
Omicron: What science knows so far about latest Greek-lettered COVID variant
DOH: Booster doses for fully vaxxed adults to start December 3
This new condo in the South will make you want to turn a new leaf
NGCP transmission tower in Lanao del Sur bombed
Legarda: Ending Violence Against Women, a cause for all
Smart offers wireless fiber-like speeds to Filipino homes with country’s first 5G Prepaid Home WiFi
MOST READ
‘Maski na hindi ‘yung mga bright’: Duterte urges public to elect new leaders
Pacquiao to voters: If you can’t vote for me, then don’t vote for a corrupt candidate
Sereno warns: Those accusing Kris Aquino of ‘stealing’ Marcos jewels will face criminal case
Roque defends Bongbong Marcos: ‘He was only 15 years old in 1972’
Don't miss out on the latest news and information.