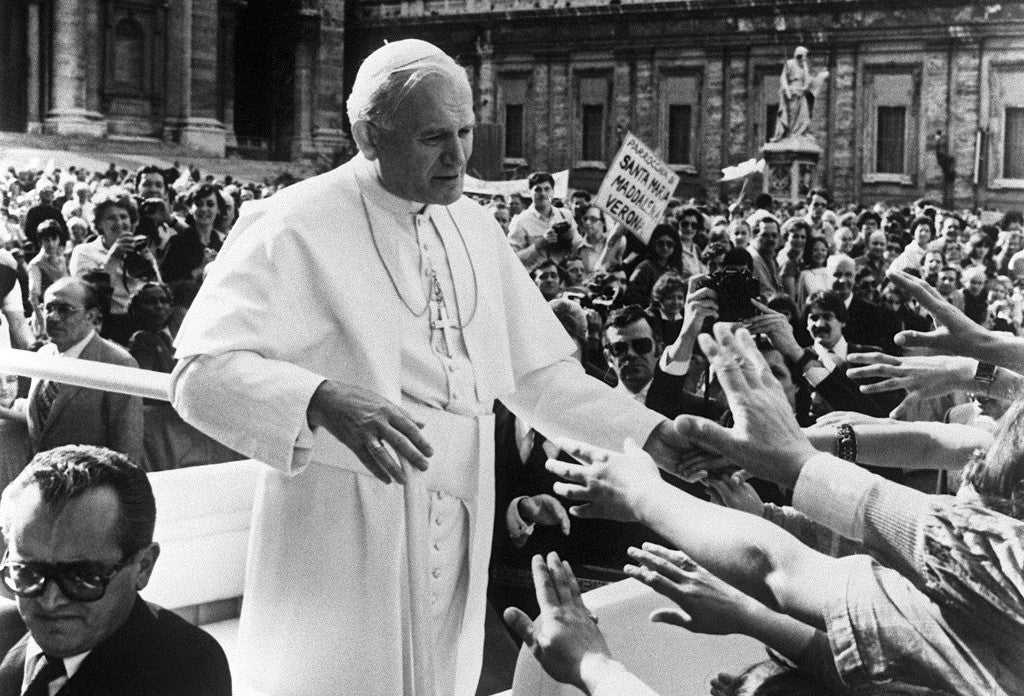 In this file photo taken on May 13, 1981 Pope John Paul II (C) blesses followers a few seconds before being shot by far-right Turkish nationalist Mehmet Ali Agca at St Peter’s Square in The Vatican. – Saint Peter’s Square in Rome was packed with 20,000 faithful hoping to catch a glimpse of John Paul II on that fateful May afternoon 40 years ago. Suddenly as his open white Jeep eased through the crowd, the pontiff collapsed — shot at close range by a far-right Turkish nationalist whose motives remain mysterious to this day. (Photo by STRINGER / POOL / AFP)

PARIS — Saint Peter’s Square in Rome was packed with 20,000 faithful hoping to catch a glimpse of John Paul II on that fateful May afternoon 40 years ago.

Suddenly as his open white Fiat “Popemobile” eased through the crowd, the pontiff collapsed — shot at close range by a far-right Turkish nationalist whose motives remain mysterious to this day.

The 60-year-old Karol Wojtyla was immediately rushed to hospital. He was hit in the abdomen, left hand and right arm. Two women in the Polish-born pope’s entourage were also hurt.

Rome was gripped by panic. Paramedics, police and journalists rushed to the scene and to the hospital.

Italian authorities quickly confirmed the shooter — 23-year-old Mehmet Ali Agca — had been arrested and that his weapon was a Browning handgun.

His accomplice — another Turk — Oral Celik fled and was arrested a few years later in France for drug trafficking and then extradited to Italy.

The news set off a frenzy around the world and prayers flooded in for the first-ever Slavic pope.

Elected in 1978, the charismatic John Paul II had made several international trips that turned into massive media events and proved wildly popular.

His insistence on direct contact with the faithful — taking children in his arms and allowing people to touch him — was completely new, but complicated the work of his security team.

The atmosphere at the Vatican that day was “unreal and mind-blowing” according to one AFP journalist.

One woman in the crowd cried out everyone’s worst fear: “The pope is dead.”

But the famously tough John Paul II was out of the woods — no vital organ had been affected and he came through the critical surgery lasting nearly six hours.

After a night of prayers across Rome, roses were laid down where the pope had been shot.

News of his recovery was encouraging but only the pontiff himself could quell the anxious crowds, and on the Sunday morning John Paul II in an unprecedented move addressed worshippers from his hospital bed in a recorded message.

When the message was broadcast, Rome came to a standstill.

On one of the big avenues leading to Saint Peter’s Square “all activity stopped for a few moments. People came out of buses, cafes and souvenir shops to hear the weak but reassuring voice” of the pope, AFP reported.

In his message, he asked his followers to pray for “my brother” who shot him and said he had “sincerely forgiven” him.

By June 3 John Paul II was back on his feet — and more popular than ever.

John Paul II went to see his attempted assassin in prison, on December 27, 1983.

When they met, Agca knelt down before him and their conversation turned into an emotional confession. Afterwards the pope said Agca had repented and again said he had pardoned him.

A member of the notorious far-right Grey Wolves group, Agca was released from an Ankara prison in 2010 after nearly three decades behind bars for the failed assassination and other crimes committed in Turkey.

His other most famous victim was the acclaimed left-leaning Turkish journalist Abdi Ipekci, who he and Celik murdered in Istanbul in 1979.

Several theories abound about who was behind Agca’s attempt on the pope’s life, with some tracing it to the KGB in Moscow.

The pope — who has since been made a saint — had been an unwavering opponent of communism.

Agca — who at one stage claimed that he wanted to convert to Catholicism and even become a priest, later comparing himself to the Messiah — has only deepened the mystery.

The hitman, now 63, at first said the Russians were behind his bid, but changed his story in his memoirs saying the Iranians put him up to it. The Vatican has dismissed this as a lie.

In his last book in 2005, the year of his death, John Paul II said he was sure the assassination had been ordered.