Duterte to visit Cotabato this Tuesday 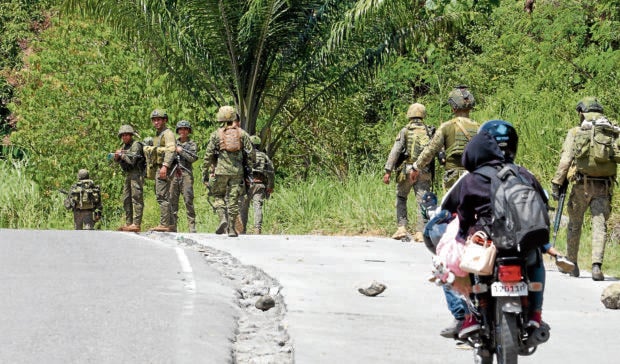 GUNMEN FLEE Soldiers who battled militants belonging to pro-Islamic State Bangsamoro Islamic Freedom Fighters who occupied a market in Datu Piglas, Maguindanao, are seen on a highway after sending the gunmen fleeing the firefight on Saturday. —JEOFFREY MAITEM

Presidential spokesperson Harry Roque said Duterte will deliver a message to the Islamic State-linked group that the government will not tolerate violence.

(The President will go to Cotabato later.)

(He will have dialogue there to send a message to the BIIF that under his administration, the law will be implemented, and using violence against fellow Filipinos will not be tolerated.)

On May 8, over 100 gunmen from the BIFF occupied Datu Paglas town in Maguindanao leading to a gun battle between the said group and the military. The town was retook following a six-hour standoff.