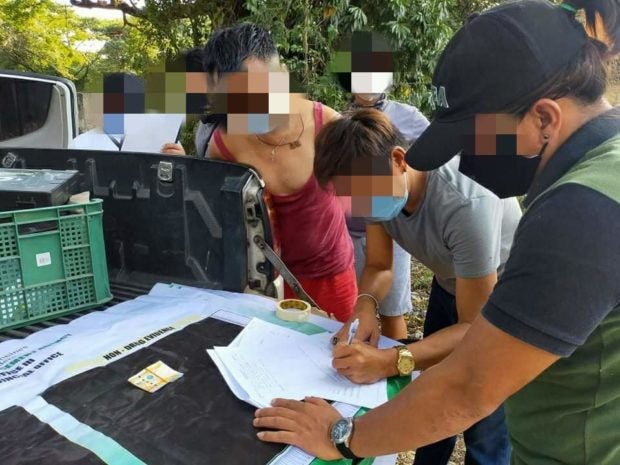 Agents of the Philippine Drug Enforcement Agency (PDEA) in Central Luzon arrested a drug suspect in Castillejos town, Zambales province on Saturday (May 8) after receiving a tip through its hotline. (Photo courtesy of PDEA)

SAN ANTONIO, Zambales- A tip received by the hotline of the Philippine Drug Enforcement Authority (PDEA) helped authorities track down a man included in the list of target drug personalities in Castillejos town.

Capili was caught selling “shabu” (crystal meth) to an undercover agent along Sitio Baring Road in Barangay San Nicolas, also in Castillejos, on Saturday (May 8).

Authorities also recovered from the suspect other plastic sachets containing shabu worth P15,000 and the marked bust money.

Frivaldo said they were tipped off by a concerned citizen through the hotline “Isumbong mo kay Wilkins” about the suspect’s drug activities.

Charges for violation of the Comprehensive Dangerous Drugs Act of 2002 are now being readied against Capili. INQ

Read Next
India’s super rich criticized for not doing enough amid COVID-19 pandemic
EDITORS' PICK
Kai Sotto continues to inspire Filipinos by sharing his passions and stories with Smart Prepaid
1Sambayan to nominees: Stick to word of honor
Alex Eala wins Grand Slam on Independence Day: ‘I hope I made my contribution to the country’
Ahead of ONE: Full Blast II, Mongkolpetch warns Elias Mahmoudi: ‘Watch out for my fists’
Trust Robredo’s political instincts – Kaya Natin! convener
EDITORIAL: Good news, bad news
MOST READ
1Sambayan to nominees: Stick to word of honor
China cautions G7: ‘small’ groups don’t rule the world
Leni vs. Sara
PH to have cloudy, rainy Monday — Pagasa
Don't miss out on the latest news and information.