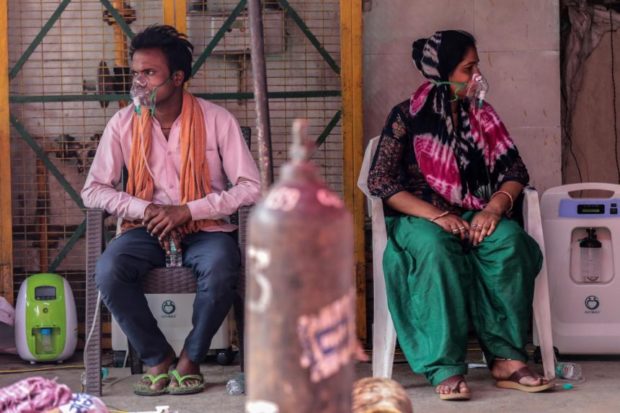 Covid-19 patients receive oxygen supply at a Sikh shrine in the outskirts of Delhi, on May 8, 2021. PHOTO: EPA-EFE

NEW DELHI — In a country home to the world’s third-highest number of billionaires, questions have mounted over the lack of contribution from its uber rich to support India’s fight against a crippling second wave of the Covid-19 pandemic.

Unlike in the first wave, when several among India’s super rich contributed generously, their role during the ongoing second wave has mostly been symbolic or focused on measures such as boosting oxygen supply.

RIL claims that it accounts for more than 11 percent of the country’s total medical grade liquid oxygen production, and has said its oxygen is being provided free to several states.

But some had hoped for more from India’s billionaires and wished that they donated generously like Mr Azim Premji, the founder chairman of Wipro.

Mr Premji, the country’s most generous philanthropist, donated 10 times more than any other ultra-rich Indian, according to the Edelgive Hurun India Philanthropy List 2020.

He was placed third in a Forbes list of global billionaires donating for pandemic relief in April last year, after pledging US$132 million (S$175 million) to humanitarian aid and health interventions to limit the spread of Covid-19.

It is not as if India’s super rich were battered financially by the pandemic. In fact, they got even richer while around 230 million Indians slipped below the national daily minimum wage threshold of 375 rupees during the pandemic.

According to the latest Hurun Global Rich List, India added 40 billionaires in 2020, taking its total to 177. Mr Ambani saw a 24 percent jump in his fortunes and was valued at US$83 billion, whereas industrialist Gautam Adani, India’s second richest, saw his wealth almost double to US$32 billion in 2020.

Just a 1.61 percent one-off tax on less than a thousand of India’s top high net worth individuals, whose wealth exceeds the combined GDP of five South Asian countries, could pay for vaccinations for all in the 18-45 group, wrote Mr S. Subramanian, a Chennai-based economist, for Scroll, an Indian news portal, last week. While many countries are providing Covid-19 vaccines for free, Indians have had to pay for vaccination at private clinics.

India’s rich have often been criticized for not giving enough to charity.

Much of the philanthropy work is paid for not through their pockets, but through legislated corporate social responsibility (CSR), including during this crisis. It is a legally binding responsibility on large profitable companies to spend 2 percent of their average net profit for the past three years on CSR activities.

“The philanthropic initiatives of the Indian corporates this year to fight the pandemic are far below their potential. What they could have done is much, much more,” said Professor Kavil Ramachandran, executive director of the Thomas Schmidheiny Center for Family Enterprise at the Indian School of Business.

He suggested the creation of a disaster management mechanism that could work either independently or with the government, and under which corporate entities can take up prior allocated responsibilities in major crisis situations.

“There hasn’t been any leadership in this direction. Just because there is a cry for oxygen, the corporates’ focus this time has been on producing and supplying oxygen,” Prof Ramachandran added.

Still, as India’s Covid-19 crisis deepened, some of India’s large corporate houses have rolled out help. The Tata Group, a salt-to-software conglomerate, has contributed cryogenic cylinders and expanded capacity in hospitals run by its companies. Its hotels have also provided beds for those who need basic medical monitoring.

The Mahindra group rolled out an “Oxygen on Wheels” initiative to help Covid-19 patients struggling to get oxygen.

Criticism has also been directed at India’s rich Bollywood actors and cricketers who, but for the honorable exception of a few, have done little. Indian actress Anushka Sharma and her cricketer husband Virat Kohli – the country’s golden couple – tweeted a video last Friday (May 7) calling for donations for a fund-raiser they launched on Ketto.

“As our country battles the second wave of Covid-19, and our healthcare systems are facing extreme challenges, it breaks my heart to see our people suffering,” said Ms Sharma, without specifying any amount they had donated.

Some, such as senior journalist Sankarshan Thakur, called out super-rich celebrity couples for setting up fund-raisers more as a way to drive their fame and not declaring their contribution.

What also caught attention is how many of India’s uber rich had fled in time before many countries instituted travel bans against Indians.

A report in The Times of India claimed some had even paid thousands of pounds to get to Britain. Quoting data from FlightAware, a website that tracks flights, it said eight private jets landed in Britain from India the day before the travel ban kicked in on April 23.

Mr Rajan Mehra, the chief executive of Club One Air, a private air charter company, and former India head of Qatar Airways , said high net worth corporates, industrialists and even a few politicians had left India, with Dubai being a popular destination.

“You couldn’t call it a stampede, but I would say 20 to 25 per cent of air travel (in the last week of April) was rich Indians,” he told The Straits Times.

Mr Mehra added that those who left had no intention of returning in the next couple of weeks. “Maybe by early or mid-June, they may come back… by then things would have tapered off with this wave.”