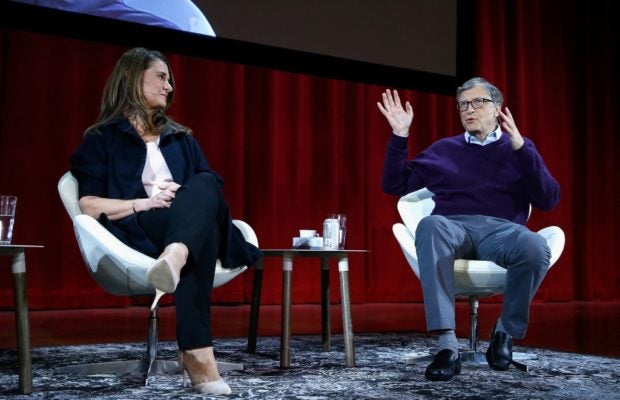 In this file photo taken on February 13, 2018 Melinda Gates and Bill Gates speak during the Lin-Manuel Miranda In conversation with Bill & Melinda Gates panel at Hunter College in New York City. Bill Gates, the Microsoft founder-turned philanthropist, and his wife Melinda are divorcing after a 27-year-marriage, the couple said in a joint statement Monday. Photo by John Lamparski / GETTY IMAGES NORTH AMERICA / AFP

WASHINGTON — From muddy streets in South Africa’s townships to cocktail parties at Davos — Bill and Melinda Gates came as a pair.

Together, they built a charitable empire through Bill’s technology company Microsoft and the massive non-profit they co-founded and co-chair, the Bill & Melinda Gates Foundation.

And when it came time to announce Monday the end of their 27-year marriage, they did that as a pair too in a joint statement posted to their respective Twitter accounts at exactly the same moment.

Gates, 65, summed it up like this in a 2019 Netflix documentary series: “In the case of Melinda, it is truly an equal partner.”

“She’s a lot like me in that she is optimistic and she is interested in science. She is better with people than I am. She’s a tiny bit less hard core about knowing, you know, immunology, than I am.”

Born October 28, 1955, William H. Gates grew up in Seattle and fell in love with machines and computer programming as a geeky-looking 13-year-old. He left Harvard University after two years to start “Micro-soft,” a software company, with a childhood friend.

On the other side of the country, Melinda Gates was born Melinda French on August 15, 1964 in Dallas, Texas. The first computer she ever used was an Apple II, and she developed an interest in computer games and programming at school.

The couple met in 1987, shortly after Melinda started working at Microsoft as a product manager, her first job after graduating from Duke University.

The pair ended up sitting next to each other at a business dinner and hit it off. Melinda, now 56, described her future husband in the Netflix documentary as “funny and very high-energy.”

But Bill didn’t ask her out until a few months later, when they bumped into each other in the Microsoft parking lot. He asked her on a date — in two weeks.

Melinda teased him for not being “spontaneous enough” and told him to call her closer to the date. A few hours later, he called her at home and asked her out for that night.

They married in 1994 and had three children. Before he popped the question, Melinda says she caught Bill weighing the decision by writing out the pros and cons of marriage on a white board.

The couple would go on to revolutionize the technology world: Bill through Microsoft software, Melinda through helping carve out space for women in the male-dominated industry.

They launched the Bill & Melinda Gates Foundation in 2000.

Their foundation is among the world’s richest, having provided more than $54 billion in grants over two decades in areas including malaria and infectious disease control, agricultural research, basic health care and sanitation, in various parts of the world.

The couple’s divorce could create new questions about their wealth, most of which has yet to be donated to their foundation.

Bill transitioned away from Microsoft in 2006 to focus more on philanthropy. In 2010, he and Melinda, along with Warren Buffett, created the Giving Pledge, which encourages billionaires to give the majority of their wealth to charity.

Initially, Bill wrote the foundation’s annual newsletter, but Melinda asked to co-author it in 2013. Although they argued about the idea — to the point that Melinda said in her 2019 memoir she thought their marriage would end because of it — they ultimately compromised.

The 2013 letter included just a section by Melinda. They co-authored the letter the next year, but Bill wrote most of it. By 2015, it was a true joint venture.

Even after their divorce elements of that partnership may remain.

“We continue to share a belief in (our) mission and will continue our work together at the foundation,” their statement said. “But we no longer believe we can grow together as a couple in this next phase of our lives.”

Read Next
DOST to proceed with ivermectin trials, urges critics to have ‘open mind’
EDITORS' PICK
Duterte invites Enrile to discuss maritime issue with China
Must-know scams to avoid when buying cars
POVA x Mobile Legends Bang Bang: A partnership that’s built to win
Roque may speak on int’l law, but Locsin says it isn’t foreign policy
Tired of your Wi-Fi signal problems at home? Here’s a solution!
MUP 2020 Rabiya Mateo on dealing with pressure and beauty standards
MOST READ
Sharon Cuneta at 55 has new love team, MaRon
Duterte to China: PH won’t withdraw ships from West Philippine Sea
NCR Plus eases to GCQ ‘with heightened restrictions’ from May 15-31
‘Nobody noticed the freezer was turned off’: 348 Coronavac vials destroyed in Cotabato town
Don't miss out on the latest news and information.