Next major war will be ‘very different,’ — US defense secretary 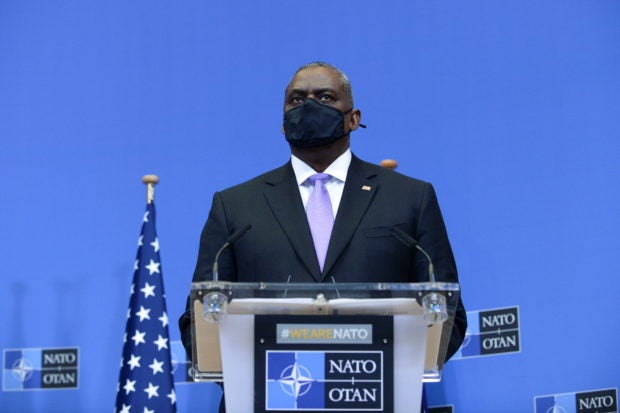 FILE PHOTO: U.S. Secretary of Defense Lloyd Austin looks on during a joint news conference with NATO Secretary General Jens Stoltenberg and U.S. Secretary of State Antony Blinken, following a meeting after U.S. announced the withdrawal of all its troops from Afghanistan by September 11, 2021, at NATO’s headquarters in Brussels, Belgium April 14, 2021. REUTERS/Johanna Geron/Pool

WASHINGTON — The United States needs to prepare for a potential future conflict bearing little resemblance to “the old wars” that have long consumed the Pentagon, Defense Secretary Lloyd Austin was set to say on Friday in his first significant policy speech.

Austin, according to advance excerpts of the speech, was to call for harnessing technological advances and better integrating military operations globally to “understand faster, decide faster, and act faster.”

“The way we’ll fight the next major war is going to look very different from the way we fought the last ones,” Austin will say during a trip to the Hawaii-based U.S. Pacific Command, according to excerpts from his speech provided to Reuters.

The excerpts did not mention rivals like China or Russia. They came as the United States starts an unconditional withdrawal from Afghanistan on orders from President Joe Biden aimed at ending America’s longest war and resetting Pentagon priorities.

Critics say withdrawing from Afghanistan will not end that country’s internal conflict, extinguish the threat of terrorism or make experience from 20 years of counter-insurgency warfare irrelevant, as militant organizations like Islamic State spread around the world.

Austin acknowledges that he has spent “most of the past two decades executing the last of the old wars,” learning lessons he will not forget.

His remarks did not appear to prescribe specific actions, or predict any specific conflict. He instead appeared to outline broad, somewhat vague goals to drive the Pentagon under the Biden administration.

“We can’t predict the future,” Austin will say. “So what we need is the right mix of technology, operational concepts, and capabilities – all woven together in a networked way that is so credible, flexible, and formidable that it will give any adversary pause.”

Preventing a conflict would mean creating “advantages for us and dilemmas for them,” Austin will say.