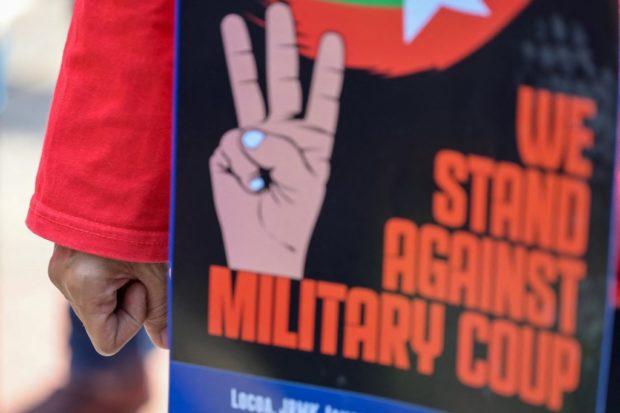 Demonstrators calling for democracy in Myanmar take part in a rally outside the Association of Southeast Asian Nations (ASEAN) building in Jakarta on April 24, 2021, where the ASEAN summit on the Myanmar crisis is due to take place. (Photo by BAY ISMOYO / AFP)

The strongly worded comments followed a meeting in Jakarta of the Association of Southeast Asian Nations (ASEAN), which was the senior Myanmar general’s first foreign trip since security forces staged a coup that ousted civilian leader Aung San Suu Kyi in early February.

Min Aung Hlaing has become the focus of international outrage over the coup and a subsequent crackdown on dissent that has left more than 700 dead.

“The first requested commitment is for the Myanmar military to stop the use of violence and that all parties there at the same time must refrain so that tensions can be reduced,” Widodo said Saturday.

“The violence must be stopped and democracy, stability and peace in Myanmar must be restored.”

He also called for the release of political prisoners and for a special envoy to be allowed into the crisis-hit nation to “push for dialogue”.

Min Aung Hlaing did not make a formal public statement.

But Singapore’s prime minister Lee Hsien Loong, who called for the release of Suu Kyi from house arrest, said the junta leader “heard us”.

“He was not opposed to ASEAN playing a constructive role, or an ASEAN delegation visit, or humanitarian assistance, and that they would move forward and engage with ASEAN in a constructive way,” Lee told reporters, citing the general’s comments at the meeting.

Saturday’s talks follow mass protests which have been met by a brutal crackdown that has left hundreds dead.

An estimated 250,000 people have been displaced, according to a UN envoy, with Myanmar’s democratically elected leaders in hiding or under house arrest.

Also at the weekend meeting was the Sultan of Brunei, the current chair of ASEAN, as well as leaders and foreign ministers from most of the 10-country group, including Malaysia, Cambodia, Thailand, Vietnam, the Philippines and Laos.

Small protests outside the bloc’s Jakarta headquarters were dispersed by security personnel.

In Myanmar, protesters continued to take to the streets Saturday, including in northern Kachin state, where demonstrators wore blue shirts to symbolise detainees.

In commercial hub Yangon, some residents staged a mock funeral for the senior general by smashing saffron-coloured clay pots on the ground, symbolic of cutting ties with the dead.

The general’s involvement in the Jakarta talks has angered activists, human rights groups and a shadow government of ousted Myanmar lawmakers, which was not invited to the gathering.

“Meetings that contribute to a solution to the deepening crisis in Myanmar are welcome,” the shadow administration said in a statement.

“(But) meetings that exclude the people of Myanmar but include murderer-in-chief Min Aung Hlaing… are unlikely to be helpful.”

The lawmakers called on the junta to “stop murdering civilians”, release more than 3,000 political prisoners and return power to the country’s democratically elected government.

“The crisis initiated by a murderous and unrepentant Myanmar military has engulfed the country, and will cause severe aftershocks — humanitarian and more — for the entire region,” rights group Amnesty International said ahead of the meeting.

There have also been calls for the regional bloc to expel Myanmar.

But ASEAN has previously taken a mostly hands-off approach to members’ internal affairs.

Few analysts had expected major breakthroughs from the meeting, saying instead it was a chance to bring Myanmar’s military to the bargaining table and pave the way for a possible resolution.

“We have to be realistic here. I don’t think the summit is going to bear out a full-blown plan on how to get Myanmar out of the conflict,” Mustafa Izzuddin, senior international affairs analyst at Solaris Strategies Singapore, said before the talks.

“But rather I think it will start the conversation and perhaps lay the parameters as to how a resolution could be found.”

The crisis engulfing Myanmar has delivered a major challenge to the future of the ASEAN bloc and its consensus-driven approach.

“International eyes are on (it) to see whether the regional approach that ASEAN has taken to find a resolution in Myanmar is effective,” Izzuddin said.