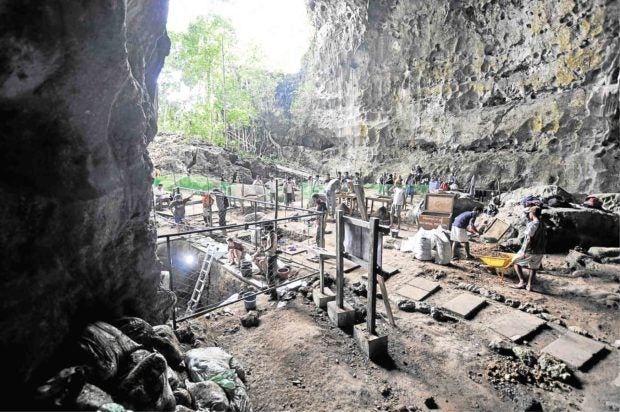 MANILA, Philippines — The fossils of  three unique species of a giant cloud rodent were unearthed in the caves in Northern Luzon, a breakthrough study from the University of the Philippines (UP) showed.

According to an article posted in UP’s website, the discovery was made by a team from UP, the Philippine National Museum, and the Field Museum of National History from the United States, after they studied fossil remains obtained from different caves in Northern Luzon.

All three species were believed to have lived simultaneously with the oldest human species known in the country, the Homo luzonensis.  Two of the rodent species went extinct only around 2,000 years ago.

“These are three previously unknown species from an unusual group of rodents, locally known as buot or bugkun, and known in English as giant cloud rats, that live only in the Philippines,” Dr. Janine Ochoa, the lead author of the journal which was published in the Journal of Mammalogy, said.

Ochoa is also an Assistant Professor of Anthropology at UP Diliman

Co-author Dr. Lawrence Heaney, who is from the Negaunee Curator of Mammals at the Field Museum of Natural History in Chicago says that the giant rodents weighed from one to two kilograms.

National Museum’s zooarcheologist and co-author Marian Reyes said that the species are relatives of an ancient branch that arrived in the Philippines from mainland Asia around 14 million years ago.

“These giant rats and their relatives are members of an ancient branch on the tree of life that arrived from the Asian mainland about 14 million years ago and live only in the Philippines,” Reyes said.

“The two that became extinct [more recently] were giants among rodents, both weighing about a kilogram. They were big enough that it might have been worthwhile to hunt and eat them,” Heaney added.

Local terms were used in naming the three new species.

UP said that the largest of the fossil cloud rats was called Carpomys dakal, “named so because it is much larger compared to the known living species in the same genus, Carpomys melanurus and Carpomys phaeurus”.

One of the fossil species was called Crateromys ballik — ballik, or small in the Dupaningan Agta dialect, because it is smaller.

The third species is named after Cagayan where most of the sites are located, hence, Batomys cagayanensis.

The fossils were discovered in Callao Cave in Cagayan and other nearby caves.  Famously, Callao Cave was the site where Homo luzonensis was found, which shook claims on the origin of civilization in the country as this human species was believed to have existed 67,000 years ago.

The discovery contradicts the belief that the first settlers in the country were cavemen from Palawan, whose remains were dated to be around 30,000 to 40,000 years ago.