MANILA, Philippines — Out of the 42 hospitals in Metro Manila that are under critical status because of their limited bed availability specifically for COVID-19 patients, 22 of them have already hit 100 percent occupancy based on recent Department of Health data as of April 21.

The hospitals that have reported full bed occupancy were:

The figures represent a decrease from last April 14, when 54 hospitals were listed as critical and 32 were at capacity.

Meanwhile, 26 hospitals were listed under the high-risk status. 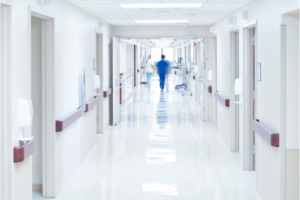 Hospitals are bursting at the seems. INQUIRER.net stock photo

The recent data also showed that 155 facilities have submitted their data and were categorized based on their occupancy levels while only 154 hospitals were listed in the health department’s COVID-19 tracker last week.

In addition, around 79.92 percent or 621 of 777 total Intensive Care Unit (ICU) beds dedicated to COVID-19 patients in Metro Manila hospitals are already taken, according to the same DOH data.

Under the critical level, hospitals have already reached more than 85 percent occupancy of their beds for COVID-19 patients.

This article is about how well Metro Manila hospitals are prepared to handle any COVID-19 outbreaks in the region, which has been the epicenter of the epidemic in the Philippines.

The article included COVID-19 bed allocation data only from hospitals in Metro Manila.

READ: Some NKTI patients lie on the ground, sleep in the open due to occupancy surge

Read Next
DOH reports 8,719 new COVID-19 cases
EDITORS' PICK
Duterte warns of possible lockdown if ‘more aggressive’ Delta variant spreads
Hidilyn Diaz wins weightlifting gold in Tokyo Olympics
Harnessing technology for quality education
Duterte: When I said I will fight drugs in 6 months, I thought it was like in Davao
Tips for a cheerful life
Connect to PH’s fastest network with new Signature Plan Lite at only P599 per month
MOST READ
Hidilyn Diaz wins weightlifting gold in Tokyo Olympics
Go to war with China over West PH Sea? It will be a ‘massacre’, says Duterte
Hidilyn shoots not only for gold but also for permanent place in PH sports history
Duterte acclaims Sotto: ‘He can become a good vice president’
Don't miss out on the latest news and information.