From Boracay to Oras, pantries keep on giving 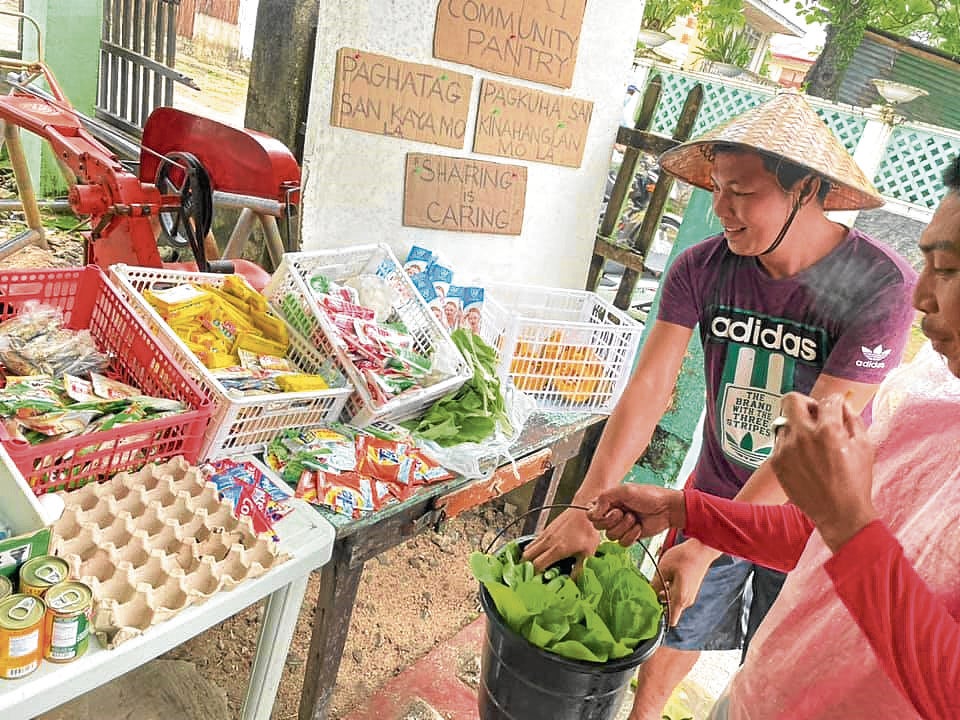 NO ONE GETS HUNGRY  – The community pantry in Biri town, Northern Samar province, is among the projects initiated in the Visayas by residents wanting to help their neighbors as the country deals with the coronavirus pandemic. —PHOTO COURTESY OF MARY JOY SABANGAN

ILOILO CITY—While the operation of community pantries has been threatened by issues of Red-tagging and red tape, there’s no stopping ordinary people and groups in the Visayas from pitching in to help those in need.

From the resort island of Boracay in Aklan province to a poor town in Eastern Visayas region, kindness and caring for others overflows as the country deals with the economic impact of the COVID-19 pandemic.

Residents of Boracay initiated the “Helping Hand Project” with at least 20 community pantries put up in the villages of Balabag, Manoc-Manoc and Yapak.

“We are private individuals who have joined hands to help residents who lost their jobs and sources of income survive,” said Hannah Sacapaño Fernando in a Facebook post.

Fernando said Boracay, which depends largely on tourism income, had been reeling from lack of tourists since the island was closed for six months in 2018 to undergo environmental rehabilitation, and from March to October last year due to the health crisis. “Many have lost their jobs or businesses and the means for their day-to-day subsistence,” she said.

She said they were not connected to any politician or organization nor have they any political ambition.

NEXT MEAL – Two construction workers get their next meal at a community pantry set up in Barangay Guadalupe in Cebu City. —NESTLE SEMILLA

In the capital town of Kalibo in Aklan, North Western Visayan Colleges also put up a community pantry on Pastrana Street and stocked this with eggs, canned goods, bananas and instant noodles.

At least three community pantries were established in Iloilo City—in Barangay Mansaya, in Jaro District and in La Paz District.

While organizers of community pantries in other areas had been subjected to Red-tagging, Iloilo City Mayor Jerry Treñas encouraged Ilonggos to put up food stations, stressing that they need not seek his permission to do so.

The Iloilo city government since last year has put up 240 community kitchens, providing free meals to residents worst affected by quarantine restrictions. A bulk of the funding for these kitchens came from private donors.

In Sibalom town in Antique province, schoolteacher Renalyn Valenzuela put up a community pantry with the help of her cousins abroad. Friends have also donated vegetables and grocery items.

In Biri town, Northern Samar province, a community pantry was set up by Mary Joy Sabangan, an elementary schoolteacher; and Maria Vandervis, who works at Biri local government.

They spent around P8,000 from their own pockets and solicited from friends in order to buy rice, canned goods, noodles, eggs, vegetables, sachets of coffee, laundry soap and shampoo.

In Oras town, one of the poorest localities in Eastern Visayas, a community pantry was initiated by Franklin Robedizo and his brother-in-law, Jessiejun Columbretes.

According to Robedizo, who works as secretary of the provincial board in Borongan City, they packed goods containing a kilo of rice, two noodles and a can of sardines so they can reach more people.

“We try to inform people that what we are doing is like the Filipino ‘bayanihan’ (mutual help) spirit,” he said.

In Cebu City, a group called One Guadalupe, in cooperation with its Sangguniang Kabataan, also put up community pantries in five areas in the city’s largest village.

Rachel Olmogues said these community pantries shall be accessible to those willing to donate goods like sardines, instant noodles, rice, fruits, vegetables and bottled water.

In Negros Occidental province, the group Sowing Legacy Movement Inc. opened a community pantry in Barangay 27 in Bacolod City as donors brought even modest contributions for those in need.

Kim Lizares, one of the organizers, narrated how an old man, who had a stroke, went to the pantry and got canned goods, eggs and noodles.

The man, she said, returned to the pantry and donated “malunggay” leaves, which he got from his backyard.