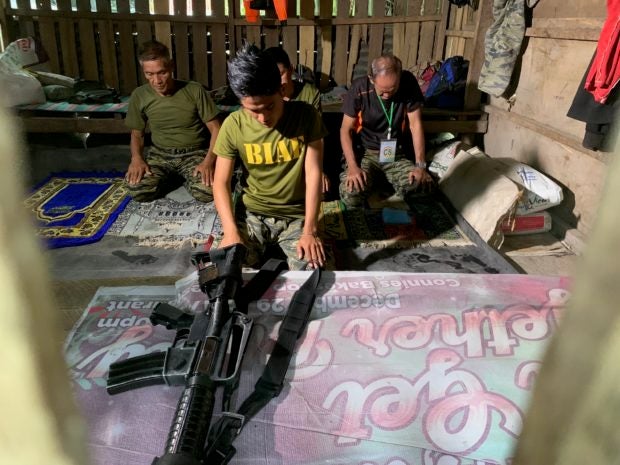 STILL ARMED The Moro Islamic Liberation Front is supposed to have been decommissioned and its fighters disarmed as a key component to the peace deal that led to the creation of the Bangsamoro Autonomous Region in Muslim Mindanao, but some still bear arms as shown in this photo taken on January 2019 inside their camp in Sultan Kudarat town of Maguindanao. —JEOFFREY MAITEM

In the report, “Southern Philippines: Keeping Normalization on Track in the Bangsamoro,” released on April 15, the Brussels-based International Crisis Group (ICG) warned that members of the former Moro rebel group who signed a peace deal with the government in 2014, and currently leads the transition government in the Bangsamoro Autonomous Region in Muslim Mindanao (BARMM), could already be getting impatient over the slow pace of the “normalization,” or the process of integrating them into mainstream communities.

“Ex-rebels are growing impatient with the government’s failure to distribute promised economic packages and over delays in bringing development programs to camps where many of their members live,” said the report released through its website.

But the group said only “fewer than one-third of the former guerrillas” actually laid down their weapons and “Manila has been slow to distribute to them the economic packages meant to entice them to cooperate.”

The ICG stressed the “urgent” need to fulfill the peace deal’s provisions, with the 2022 elections that will mark the end of the transition period drawing close.

BARMM officials have asked Malacañang and Congress to extend for another three years the transition period that will end next year but there has been no action yet from the national government.

“There are plenty of armed groups in the Bangsamoro that might exploit the moment’s fragility. A loss of momentum could also threaten what are currently reasonable peaceful relations among the majority Moro Muslims, Christians, and other ethnoreligious groups,” it said.

But he assured this would not escalate into the former fighters bearing arms again.

“Those are legitimate grievances that we are working on and there is no indication our members will be joining other armed groups,” Sinarimbo said. INQ