Group of 15 on their way to visit lake in Tabuk City when tragedy struck; 2 survivors in critical condition
Philippine Daily Inquirer / 04:35 AM April 20, 2021 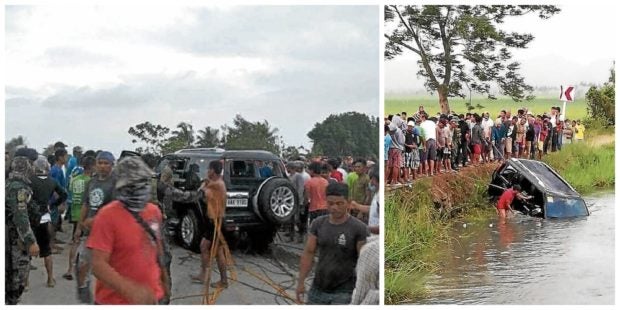 ILL-FATED A black Ford Everest plunges into an irrigation canal at Barangay Bulo, Tabuk City, Kalinga, on Sunday, killing 13 of its 15 passengers. The vehicle was later pulled out of the canal but most of the passengers had drowned by then. —PHOTOS COURTESY OF ARCELI GUNDAY/CDRRMO-TABUK

A trip to visit a scenic lake in Tabuk City, Kalinga province, on Sunday turned tragic after 13 people, including seven children, were killed and two others were critically injured when the car carrying them fell into a 10-foot deep irrigation canal in the city on Sunday, police said.

The victims were heading to Bulo Lake past 4 p.m. when Soy Agtulao, 36, a jail officer and driver of the black Ford Everest, lost control of the vehicle, causing it to swerve and plunge into the water-filled canal, according to Col. Radino Belly, chief of the Tabuk City police.

Investigators said the fatalities died due to drowning when they were trapped inside the sinking car.

Agtulao was visiting her parents in the village of Bulo of Tabuk when she and 14 others made an unplanned trip to the lake area, a popular tourist destination which is about 5 kilometers from the city center, for a quick breather and a picture-taking activity, according to Belly.

Agtulao was identified as a Bureau of Jail Management and Penology employee assigned in Bontoc town in nearby Mountain Province by Cordillera police director Brig. Gen. Ronald Lee in a report on Monday.

During the trip to the lake at around 4 p.m., Agtulao was accompanied by her father, Alfredo Cutit Lope, 59; her children Cyan, 4; Cydwin 6; and Cyril, 10, investigators said.

Only Cyril, the driver’s eldest child, and Perez, one of the adult companions, survived the accident but remained in critical condition at Kalinga Provincial Hospital in the city, police said.

It was not immediately known how the other passengers were related to each other.

“The victims were on their way to Bulo Lake to take photos. It was a spur-of-the-moment decision,” Belly told the Inquirer in a text message.

The victims were taken by police and civilian responders to Kalinga Provincial Hospital and Mejia Kim District Hospital, also in the city, but 11 of them were dead before reaching the hospitals. Two others died while being treated, according to Belly.

Tabuk Mayor Darwin Estrañero said the family and relatives of the victims would get financial assistance for the burial of the fatalities and medical help for those who were hospitalized.

Following the tragedy, Philippine National Police chief Debold Sinas directed all police units to strictly enforce land transportation laws, particularly the ban on overloading, after noting that the sport utility vehicle driven by Agtulao only had a seating capacity for seven persons.

Sinas ordered a thorough probe on the mishap and directed the PNP Highway Patrol Group to keep close watch on other violations that endanger motorists and their passengers.

While expressing his sympathies for the families of the victims of the tragedy, Sinas urged motorists to “strictly observe load limits and maximum passenger capacity of motor vehicles, as well as the required physical distancing protocol inside public and private conveyances.”