Russia says Navalny to be transferred to prison hospital 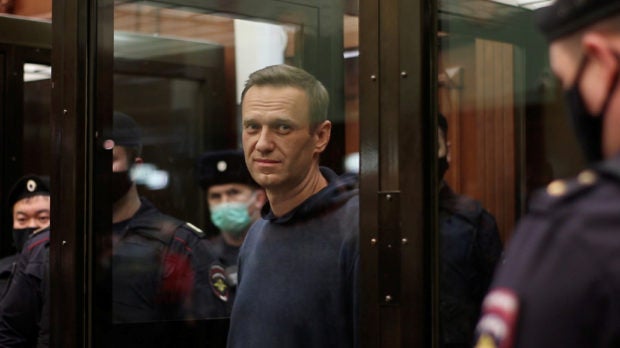 FILE PHOTO: A still image taken from video footage shows Russian opposition leader Alexei Navalny, who is accused of flouting the terms of a suspended sentence for embezzlement, inside a defendant dock during the announcement of a court verdict in Moscow, Russia February 2, 2021. Press service of Simonovsky District Court/Handout via REUTERS

MOSCOW — Russia’s prison service said Monday that hunger-striking Kremlin critic Alexei Navalny would be transferred to a hospital for inmates, but deemed his condition to be “satisfactory.”

The prominent opposition leader announced the protest three weeks ago in a bid to receive proper medical attention as his health deteriorated in a prison colony outside Moscow.

He was thrown behind bars in February for more than two years on old embezzlement charges, just weeks after he returned to Moscow from Germany where he had been recuperating from a near-fatal poisoning attack.

The prison service said in a statement that a group of doctors had “made a decision to transfer A. Navalny to hospital for convicts located on the territory of Penal Colony No 3.”

“At present, A. Navalny’s medical condition is deemed to be satisfactory; he is being examined by a general practitioner every day,” the statement added.

The 44-year-old anti-corruption campaigner was sentenced earlier this year to serve out his sentence in Penal Colony No 2 outside the Russian capital and soon after began complaining of back pain and numbness in his limbs.

On March 31, Navalny announced a hunger strike to demand proper medical treatment and his allies said the prison authorities have threatened to begin force-feeding him.

The prison service said in its statement that with Navalny’s consent, “he was prescribed vitamin treatment.”

Western countries have urged Russia to provide Navalny with proper medical care and to release the Kremlin critic, and warned against possible repercussions.